Today started at 03:00 as we were trolling for krill. The first trawl came up with one silver fish and a terrapod which is a snail looking thing with flapping wings. The second and third trawl came up with a hand full of krill, but not the 4000 that we were hoping for. The fourth trawl came up with about 2000 krill and several more trawl’s after this produced about another thousand. We had to put 1000 of these krill into individual jars and immerse them in the chilled tank while all the rest went into large storage tanks. Others were put singularly into specimen tubes and placed into liquid nitrogen for later DNA testing. Apart from a short break between trawling, we didn’t finish till about 11:00 and now I am trashed. I certainly won’t be volunteering to catch krill again. It was interesting though watching the little buggers swimming around. I tasted one and it was like a real salty anchovy. We also caught some tiny ice fish and lots of fish eggs.


This afternoon we have had meeting after meeting and I didn’t get to look out the window till about 16:00. It looks like we will arrive at Horse shoe harbour at Mawson station between 06:00 – 07:00 Tuesday morning local time. The plan is for all the Mawson expeditioners to be lifted off by helicopter first thing in the morning so we have to be ready to roll at first notice. That means packing everything tonight. Horse shoe harbour is still iced over and about 600mm thick and there are lots of meetings going on to discuss how to smash our way in. Either smash our way in forward (We may have to disable our WEB cameras just in case we end up on the beach) or back up to it and give it full thrust and try and blow it out that way. Either way it should be exciting to watch. If we can’t get in then everything will have to be transferred by helicopter meaning we would have to leave our two new Hagglunds behind which would be tragic.
This afternoon it is very overcast and snowing slightly and we are passing many large ice bergs, one of them was an amazing Jade berg which was half coloured jade with further bands and stripes of jade. These jade bergs are created when melt water flows into a crevasse and refreezes and then gets compressed with the rest of the berg. They are quite rare and very spectacular. The forecast is for winds to be increasing each day and possibly up to 60 knots by Thursday. I want to get an early night tonight as I want to be up around 05:00 to take photos as we sail into Mawson through ice berg alley.
@ 24:00 UTC (6pm local)
Speed 13.9 knots
Heading 276
Roll 1 degree
Pitch 1 degree
Depth 423 meters
Water temp -0.85 degree
Air temp -2.25 degree
Wind E @ 21 knots
Lon 65.12E & Lat 66.58S 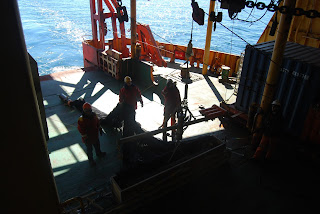 Preparing the krill net on the trawl deck 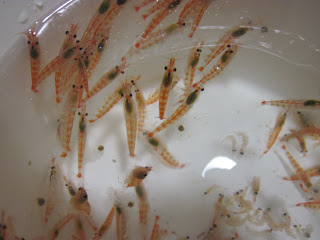 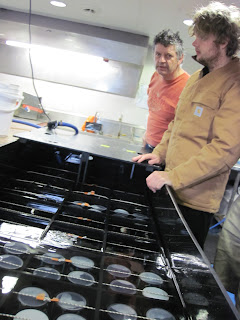 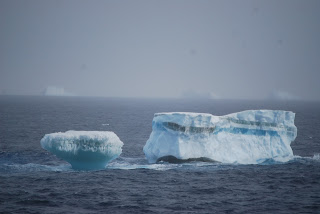 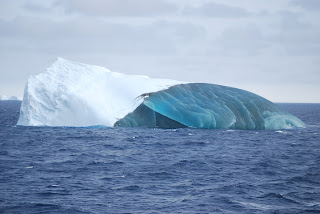 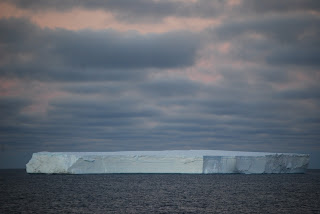 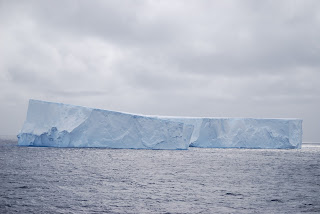 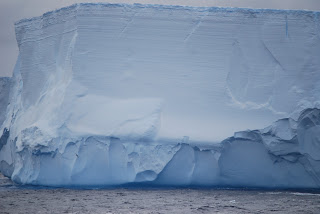 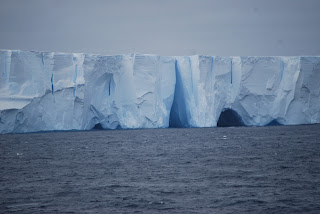