This morning I had a needed sleep in as I have been so tired all week. The wind was gusting well over sixty knots but there was no blowing snow and not a cloud in the sky. One look out the window and you could be fooled it was a perfect summers day and I should be out strolling through the Framnes.

I decided to rip the remaining CD's and DVD's I brought down since back at home I would never have any time to do stuff like this. By the time I had finally finished and then had a shower it was lunch time. Time seems to go a lot faster down here near the pole, that is unless you are out shivering all night in a tent some where.

Last night Geoff drilled and tapped a piece or perspex I gave him that I want to use to repair my amplifier that caught on fire, so after lunch I decided to work on my amplifier. It was one of those really fiddly jobs that I wasn't looking forward too. It took me over four hours to modify my amplifier and make this new band switch contacts. By the end of it I had had enough and I decided to put all the housing back together tomorrow.

After dinner we all chatted for a while then after the party broke up I went up stairs to the cinema and watched another Rolling Stones concert. After this a group of guys came to watch the rugby so I decided to have an early night. 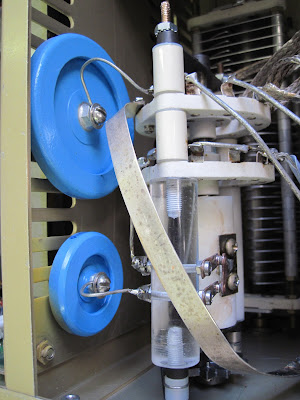