Today was once again perfect weather at -28c and no wind and it was killing me sitting around and not being out somewhere enjoying it. I just wish I could head out on my own for a while but the fun police won’t have a part of that. So after a very relaxing morning I wandered down to the ham shack and decided to have another look at my sick radio. After messing about for a few hours I found a way to use SSB voice by using software to kill the PTT. It’s a bit rough and clunky, but it works and allows me to use phone once again so I am back in business.

The next thing I did was down load WSJT – HF and after I painstakingly set it up I made a few contacts and found it to be so much better and easier to use than the moon bounce version I had been using. Wow, so far so good, two down and one to go. I want to try and interface my Flex5K with the Yaesu Quadra FL-1000 amplifier. I down loaded a utility program called DDUtil that will output my Flex5k band data in BCD code on the PC parallel port to hopefully control the amplifier. It’s got potential, but I won’t know for sure till I make up a cable tomorrow and do a lot more playing around.

While I was messing about doing this I heard my close neighbour from Perth on the radio so I gave him a call and we had a chat for a while. After talking to Ken I had a chat with a bloke in Victoria but I had to cut it short as I was needing a drink and a feed as I had hardly eaten or drank anything all day.


I spent the rest of the evening working on my blog and answering more emails. Keldyn called and said there was a movie just about to start in the cinema so I wandered up to take a look. I was a Japanese horror movie and I lasted about ten minutes before walking out. I worked on my blog till very late into the evening. There was a lot of auroral activity going on outside when I crawled into bed but I was too tied to gear up and go outside to photograph them. 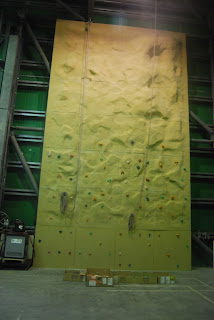 The new climbing wall taking shape in the green store 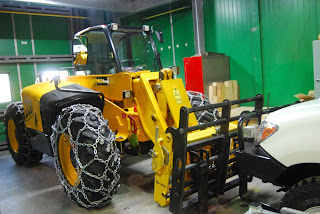 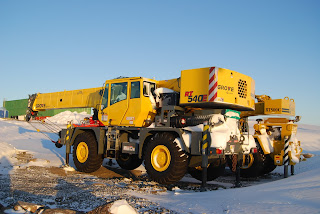 A couple of cranes used for construction and resupply
Posted by Craig Hayhow at 23:10