Today once again there was hardly a cloud in the sky, bright sun but still blowing 30 knots all day. Quite a few of us found it hard to get motivated this morning and we ended up having a lengthy discussion over breakfast. Chris rolled in at some point so I can officially write it off as a comms meeting. Without most of us knowing, Justin, Pete L and Cliff left for Macey hut for a couple of days.

I finally dragged myself down to the office where I spent the morning rebuilding the file server menu structure and getting things back to normal after it crashed a couple of months ago. I also put in a request to our station leader (to be forwarded onto head office for approval) to lead a trip into the following places which are outside our approved operating area.

I'm over summer's camp. I want to do some big ball stuff and get out off the beaten track before my time here is up. Strait away my Ledingham Dept request was denied even though last year's expeditioners were allowed to go there, so that was disappointing but I will still work on it. I guess I will have to wait and see what the powers to be in Kingston come back with on the other requests. If you don't ask you won't get.

I did my first Internet shopping today to order a few little bits and pieces including a couple of hard drives hopefully to be delivered on V1 flight in November. I have been very disciplined with Internet shopping whilst down here as I had visions of getting bored and ordering all sorts of stuff throughout the year and getting home only find a sea container dumped on the lawn full of junk that I can't even remember ordering.

After lunch I went for a wander down to the mechanical work shop to return some dies and taps I borrowed and then I wandered back to the Ops building via the sea ice as I wanted to take at look a the sea ice now most of the snow has been blown off. I also wanted to check out the sea ice where Jeremy and Geoff have been dumping all the snow they have been clearing for months. The weight of the dumped snow has been causing the nearly two meter deep sea ice to sag and crack causing sea water to flow up out of cracks and refreeze around it. I never get sick of looking at all this stuff as it's so interesting and you will only see it down here. On the way back, I watched the MET balloon release. I stood there for ten minutes in the freezing wind and watched it rise to maybe ten thousand feet. It was amazing watching it get blown around in the wind and to see how the wind direction change as it climbed higher and higher.

I took a break from the mind numbing reordering and stock take to do a bit of research on the places I have requested to get permission to go to. Yes I know it's premature, but I figure if I have done my research first and I am fully knowledgeable about traversing to these locations I will have a better chance of getting approval to go there. Anyway, I just like drooling over maps, I always have.

I came up with some real good stuff, old maps, dog traverses, field notes and a tremendous amount of info to sift through. I also came across more 1960's field notes, diary's and photos which I spent the afternoon scanning for my old 1960 epeditioner comrades. There is a real treasure trove here of fifty three years of history in old brittle log books, diaies, notes, maps and old photos. I have been told they have all been copied and held in Commonwealth archives somewhere never to be seen again, so I hope this priceless and invaluable information doesn't get lost forever.

Once upon a time Australians were the leaders and experts of polar travel and exploration and all the secrets and valuable lessons and observations are contained in these crusty old documents. What these men did and achieved long ago was incredible and a documentary should be made interviewing the remaining expeditioners before they move onto that big glacier in the sky. Compared to these men, today we are mealy political caretakers of this great white continent. Yes we have satellites to take photos now from above, but we have only dared to explore by foot a microscopic fraction of the surface of Antarctica. Scientific plateau traverses are a thing of the past and in the mean time Russia, China, India, Italy and Japan are building stations on so called Australian territory. C'mon Aus, let's get back into Antarctic research. 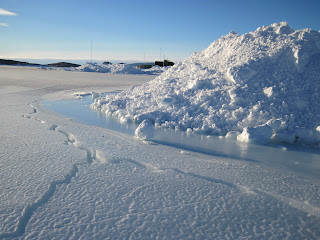 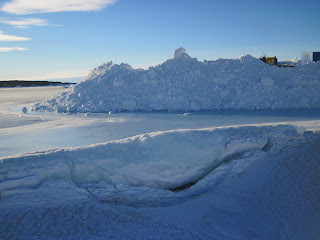 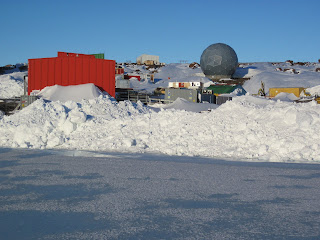