In 1987 approval was given for a hut to be sited in the Colbeck Archipelago. In that year sea ice conditions did not favour the '87 party, and no trips were made past Stibbs Bay. But fortune smiled on the '88 crew, who took the plunge. They towed the ex-Rumdoodle hut (replaced by Maxine's in 1986) down the coast and installed it on an Island in the Colbeck Archipelago on 12 July 1986. The sledge the hut is sitting on was used to carry the 1973 prefab Rumdoodle hut  and now serve as a rigid base for a positive guy-down job. 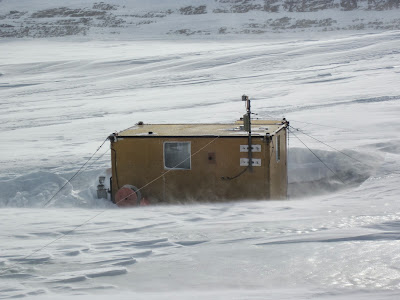 In 1969 while parked at Gwamm, an RMIT van was blown down the hill and ended up in a big crevasse just short of the ice cliffs. In 1970 it was winched out and returned to Mawson, but it had to wait another year to be repaired and for the badly smashed side to be mended. It had been written off as a traverse living van, and two enterprising expeditioners, decided on its future: Macey Island.
On 1 August 1971 the van departed Mawson behind an old Snowtrac, accompanied by a Snowcruiser. They winched the hut into place but did not guy it down, and much to their dismay 2 weeks later found that the van had blown over in a blizzard. The side was damaged again, but was repaired in situ and finally guyed down.
Since that day it has not moved, although it has had a few revamps and cleanups to keep it in shape. An outside toilet was attached in 1983.
On 14 November 1988, the van and its wooden Norwegian sledge (which was dried out and fragile) was winched onto a Smith sledge and towed it back to Mawson. So ended its 17-year reign on the island, the longest continuous service of any field hut except for Alice's Restaurant.
Today the van is still in good condition and is still mounted on a Smith sledge and is used as a temporary field hut. 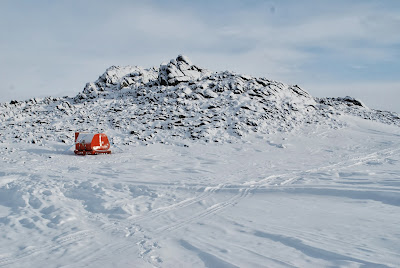