We left station at ten thirty in the morning and headed up the plateau in bright sun and blue sky. Conditions were perfect and it was great to be going up the plateau for a change. The Sastrugi was pretty light on and so we made pretty good progress up the Fang line to F14. Once at F14, I turned off at the Rumdoodle moraine line and headed North West until we reached a safe parking area just outside of the crevassed area. The temperature was up to minus seven and I was sweating and had to remove my fleecy while we were kitting up as I was so hot. The amount of gear required for glacial travel is nuts but we have to be tied together and be able to rescue each other if any of us should fall into a slot. Finally after we were all kitted out, I had my movie camera mounted on my helmet and we headed off with John in the lead and Justin taking up the rear. 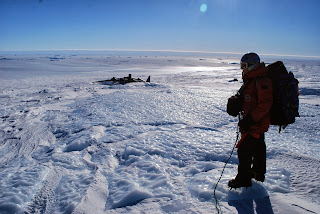 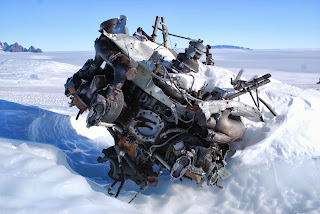 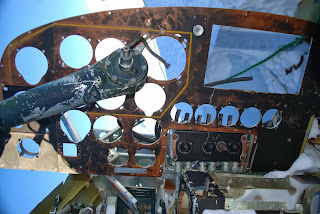 I’m no fool; I had both ends covered and were in the best position. This area is really messed up with slots all over the place as deep as four hundred meters. We had only gone a hundred yards when John (Our field training officer) turned and said this is our first crevasse crossing so stay alert and remember your training. He took two paces and fell through an ice bridge up to his waist with legs dangling into an eerie blue bottomless abyss. It was hard not to laugh, but training kicked in and he was out in no time leading the way again. Some of the slots were narrow enough to jump over while others had to be walked as you probed the snow depth with your ice axe. It was quite nerve racking at times but you just had to put the consequences out of your mind and get on with the task. After quite some time we came over a rise and right there was the aircraft. 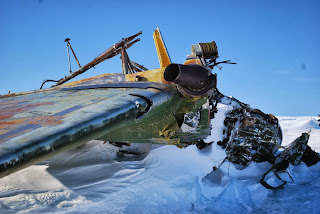 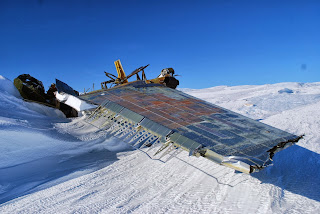 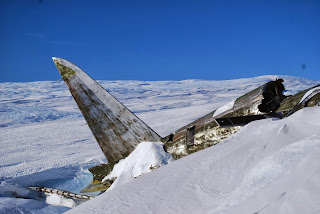 It was pretty amazing to see all this metal in this white desert. The last twenty meters was probably the worst as it was all snow and you had no idea how many slots were covered over. First we reached one of the engines that had been removed ages ago by expeditioners. Story has it they were going to do it up and mount it on the wall as memorabilia but were told by management they had to return it, so it was taken back and dumped near the aircraft. I think it would have looked great in the bar or on the wall in the mechanical workshop? What a waste!! 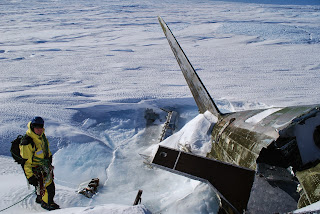 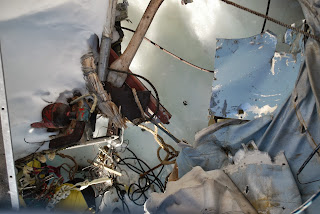 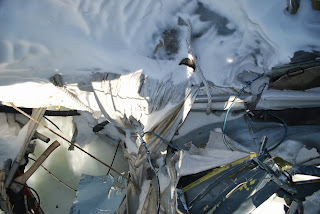 We made it over to the aircraft without incident and walked all around it inspecting everything in fine detail. It was clear it was a pretty rough old aircraft back when it was flying but what was amazing was the remarkable condition it was in after all these years laying on the blue ice being battered by blizzards for the past forty six years. Inside I could see a tent, fire extinguisher, axes and other bits and pieces, but the majority of the aircraft had been pilfered over the years. I sat in the cockpit and reflected on the dramatic end of the aircraft when it was blown into a crevasse when trying to take off all those years ago. Finally we said farewell and started our journey back to the waiting Hag. 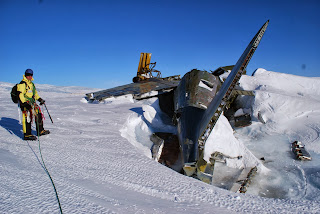 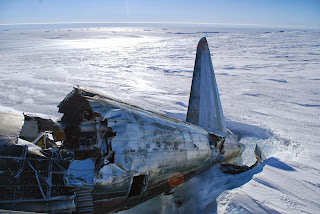 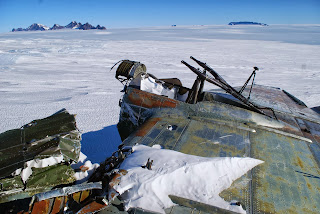 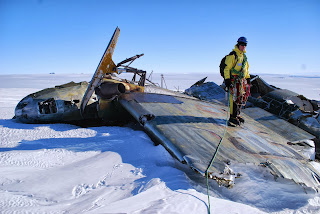 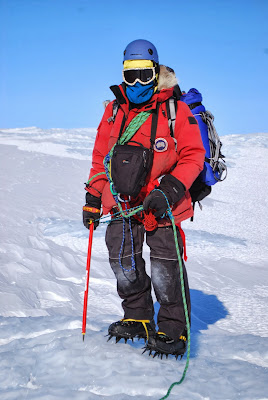 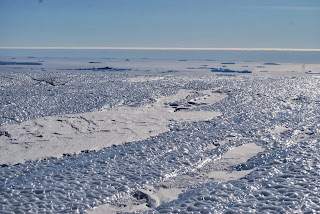 The aircraft was a Lisunov Li-2, a license-built version of the American DC3. It had arrived in Mawson December 1968 to lay a fuel dump. Back then Mawson was regularly used as a refuelling/ rest stop between the 2 Russian Antarctic bases Mirny and Molodyezhnaya. When leaving and taxiing down the Rumdoodle runway a strong gust of wind caught the plane and blew it into a crevasse, damaging the landing gear, starboard wing and starboard propeller. The Russian crew were collected the following day by 2 planes which flew out from Molodyezhnaya but the damaged plane remained. 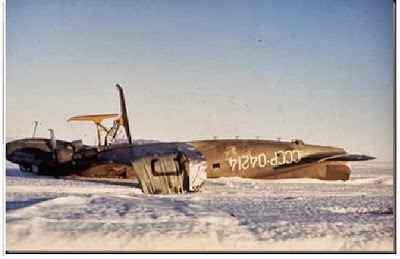 The plane ‘was securely tied down by the tail and two wing tips by a party from Mawson at the beginning of February 1969. It survived several blizzards, but on 8-9 April there was a major blizzard with gusts to 123 knots which destroyed it. Basically, it tried to fly; the fuselage broke into two near the tail, and the body of the aircraft flipped onto its back, rotating about the wing tie downs.

Over the next decade or so various bits (instruments, etc.) were surreptitiously souvenired by expeditioners. More openly, one of the propellers was engraved and presented to senior helicopter pilot Vic Barkell after the 1974/75 summer. The aircraft was completely destroyed in 1981 by Czechoslovakian dieso George Hedanek who drove a D5 through it because he “hated Russians”.

Mawson station log by the Station Leader at the time, George Hamm

Russians awoke at 0800 and had breakfast. Left Mawson in Snow Trac and VW (Beetle) for the airfield. Arrived there about 12.30. They had very crude Herman Melon type heaters – just huge blowlamps for warming up engines. Brought gifts, etc to be taken back to Dr Maksutov at Molodezhnaya. Got engines started and prepared to takeoff. In aircraft with me were pilot, 2nd pilot, radio operator, chief engineer, Soot (interpreter & correspondent) Ware (MET. OIC), Smith (geophysicist). At about 2pm as he was taxying, a strong gust of wind caught plane and blew it up onto slotted dome behind Russian fuel dump. Pilot at last moment revved motors in attempt to prevent total disaster – I had rear door opened and was ready to jump with the others when at last moment he managed to face back towards painted peak and suddenly we broke through a large crevasse – damaging starboard wing and propeller. Great catastrophe – pilot cried, all Russians depressed later sitting in OICery [building housing the Officer in Charge –Ed.]. He told me he might get the axe over this. Thank god he didn't want political asylum. What a day! No sleep - just tried to calm Russians down.

Quiet day – slept in very tired – many signals back and forth from Mirny and Molodezhnaya. Russians here quite depressed except Anders Soot – the Estonian who I think would like to stay. Advised their planes from Mokolazev were coming and they arrived at 9.25pm. Both landed at Gwamm which chief Russian pilot told me was a far better landing strip than Rumdoodle. One plane immediately flew back up to the damaged Russian aircraft near Rumdoodle while they refuelled the other at Gwamm. We had to say goodbye to them at 11.30pm as I wanted to (be) back at station for Christmas.

Most enjoyable but disastrous visit. Many souvenirs exchanged –the chief pilot gave me his beautiful fur cap.

In 2009 George Hamm, who continues to be in touch with the Estonian interpreter "Soot"; who advised that the pilot was dismissed from the Soviet Antarctica program and sent to Siberia. His fate beyond that is unknown.

This same Lisunov Li-2T aircraft #CCP-04214 was brought to Antarctica in 1958 and was used in 1961 to evacuate the seriously-ill expeditioner Alan Newman from Mawson, for the first leg of a 3-aircraft trip to New Zealand via Mirny and McMurdo stations.