With the decision made to go to Colbeck tomorrow, today was mainly taken up with preparations for the trip. It was blowing snow and about forty knots today, overcast and looking very grim, but by the afternoon the wind had dropped ten knots and the sky was clearing up a bit. Our four survival packs have to be stored on the roof of the caboose (For easy access in case we break through the sea ice) along with a second polar tent I wanted to take as well as a long 3dB VHF antenna I want to install on the hut. Two hundred litres of ATK in ten jerry cans, as well as fifty litres of petrol. Eighty litres of water, a gas bottle and two generators. A chain saw, auger drill, shovel, four ice axes, piss pot and shit bucket, booze, food, cloths, camera gear, tools, spare parts, sea ice recovery gear, winches, sleeping bags, communications equipment, batteries, chargers and heaps of other bits and pieces.

Hopefully that should just about do it. I also programmed a lot of extra way points into both GPS’s and I will spend some time searching for seven old depots along the way to see if they are still stocked. I managed to get a forecaster at the BOM to give us daily weather forecasts so that gives me some extra piece of mind. The plan is to leave Mawson at seven o’clock in the morning and to be at Colbeck hut around five o’clock in the afternoon. Getting around the Jelbart Glacier through all the rafted ice and getting across tide cracks will be the most challenging obstacles and as long as the weather is kind to us and we don’t get stuck there by fierce blizzards we should be fine. The Hag is packed and all we have to do tomorrow is to throw our frozen food, thermos and personal effects in and we’re off. 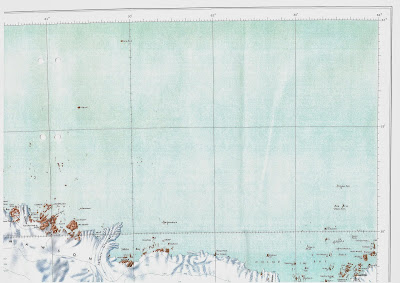