After a wild and windy night we awoke to a better day than yesterday although it was still overcast and quite windy. I was going to replace the antenna this morning but it was still too windy to do the job, so I lashed the antenna to the side of the shack for next time. We had a hot drink and cleaned up then hit the road back out to Auster for a few more hours. Once again we bounced our way back to the tide crack for a bit more footage and to watch the entertainment. It was so much fun watching the birds swimming around enjoying themselves and now and then they had us all in stitches when they would crash into each other or slip over. 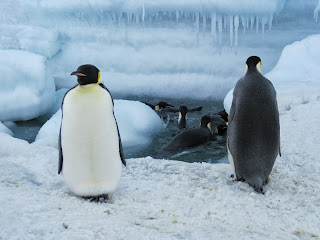 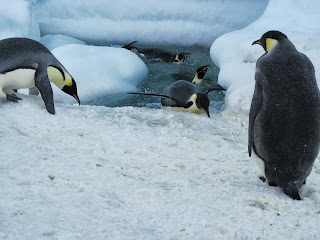 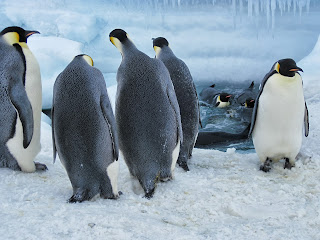 One penguin even got its head stuck in a hole in the ice and another thought if he flapped his flippers hard enough like a humming bird he might be able to take off. They also like to push each other out of the way or slap each other with their flippers. At one point we were gob smacked when we heard a chick. We turned around and saw a parent with a chick on its feet that had wandered several hundred meters from the colony over to where we were. It was such an odd thing to see. Slowly it made its way right up the water’s edge where it seemed to be fighting with another penguin which it actually pushed into the water and it climbed back out again. Was this other penguin its mate? 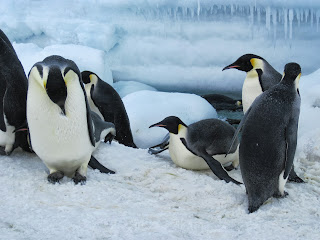 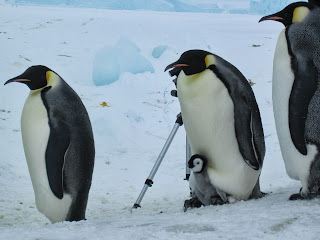 The parent that dived in with its chick

Suddenly the penguin jumped in, chick and all and our hearts sank as the baby chirps ceased. It was horrible. How could a parent do that to its baby it has nurtured for months in this cold hell of a place? Suddenly after what seemed like ages, the baby chirps started once again but it was no where to be seen. Incredibly the chick had survived the frigid waters and was somewhere trapped under the ice. We were sure it was going to die and it was only a matter of time. Suddenly the chick poked it’s head out of a tiny hole in the ice. It was trapped in an air pocket and had no way of getting out unless it dived underwater and came out the same way it went in, but impossible with its buoyant baby fluffy feathers. We watched for a while at the helpless chick wondering how long it could last when finally I couldn't take it any longer, so I asked Jeremy if he could try and make the hole bigger with the length of bamboo his camera was mounted on. He gingerly worked on breaking the ice and making the hole bigger for the next few minutes until suddenly the chick broke free and swam across the water and crawled up the bank and then ran right across the ice and into my arms. Was this for real or was I dreaming? We can’t both be dreaming? Now what should I do? 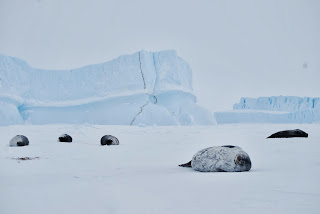 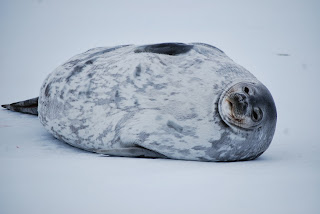 With no sight of its parent around, I decided its best chance of survival would be to carry it back to the colony and release it there. Maybe another bird would take care of it or maybe later its parent would come back and recognise its chicks call? Anyway the chick was wet and shivering so I carried it back to the colony and released it where it called and called in vain for its parent. It was depressing, so after a while we went back over to the tide crack. A while later we were watching all the action when suddenly lots of birds came scurrying out of the water as fast as they could and we sensed there was some sort of danger when right in front of us a huge seal leaped out of the water landing on the ice in front of us. 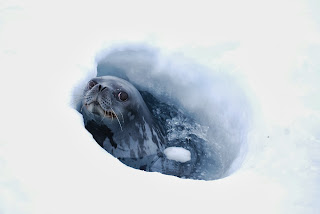 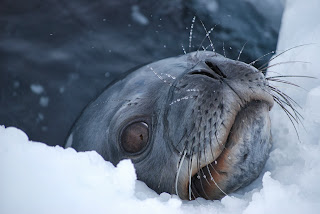 We were gob smacked again but the seal thought nothing of it and wriggled its fat body all the way over to where our Hag was parked with penguins going in all directions. In a short time things were back to normal and the birds returned to the water once again. After a while longer we decided to pack up and start the long journey back home after capturing all these amazing events with our cameras. Several miles from the colony we came across six or seven huge Weddell seals sun baking on the sea ice so we stopped to get some photos as its been such a long time since we have seen seals or any form of life besides the Emperors. The seals had a hole in the tide crack which they keep open with their teeth and the odd Emperor penguin was coming out of it. Weddell seals die when their teeth get too worn down from chewing the sea ice. They keep these holes open so they can breathe and so they can have their pups on the sea ice. 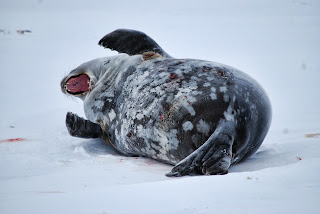 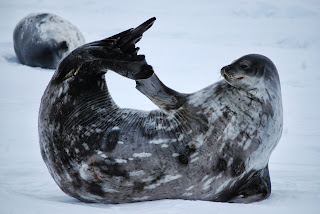 Suddenly a huge seal appeared in the hole and we got some great photos of it then without warning it sprung out of the hole right in front of us flapping about on the ice. C’mon, how much can a Koala bear in one day? It was an amazing end to an amazing couple of days. On the way back to Macey Island I steered the Hag to some colourful ice bergs I have seen before to take a closer look. They were actually bergs that had rolled over exposing the underside which were full of moraine containing dirt and rocks and boulders. Hundreds of thousands of tonnes of ice scraping the earth and sea bed compressing the ice with huge forces entrapping rocks and boulders to be carried away and deposited thousands of miles away. It was very interesting to see at close range but one has to be wary of any ice berg as even though they are grounded in thousands of feet of water, they can roll over at any time smashing the sea ice around them for hundreds of meters. 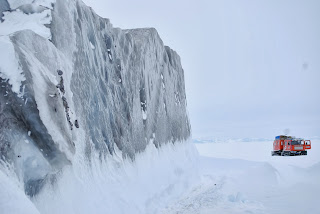 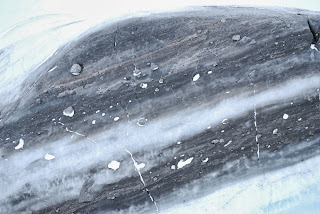 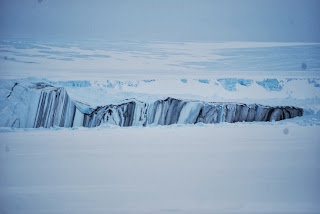 We headed south for the coast where the huge ice cliffs meet the sea ice over ten kilometres away across the worst Sastrugi Antarctic could throw at us. By the time we reached the coast, tempers were frayed and spleens were macerated. This time I wore sun glasses which helped but now and then we would still hit a bliz trail or obstruction which threatened to break every bone in our bodies. The track back was nowhere near as good as it was on the trip up due to the blizzard last night and I had to travel slower but it was still much better than travelling over the Sastrugi out wide. We arrived back at Mawson around three thirty in the afternoon with plenty of time to pack up, refuel and relax before dinner. At the peoples night Justin played some amazing time laps movies he made on ice crystals forming on the mess windows while Cookie showed slides from Antarctica and Australia. It was a good night and I slept well later.
Posted by Craig Hayhow at 10:24