Well today started off with a little bit of drama. Chris was meant to go on three days field training with John, Keldyn and Peter C but for reasons only known to him he refused to go. When Cookie ordered him to go he went and saw the doctor to reason that Cookie refused to understand his reason. Any way I got asked to go in his place at short notice and while I was getting ready suddenly he was going as long as he took a satellite phone, so I unpacked and got on with my days work. In the end they didn’t leave station till 12:15 and without the satellite phone.


I printed all the news papers and after smoko I went up to the cosray tower to finish cable tying the antenna feeder, measured the transmitter power, installed a notice, cleaned up the beacon installation and left the spares in a cupboard. Lunch was leftover chicken legs then after I shot off a few Emails and started programming telephones and directories. After five, I took a heap of gear down to the transmitter building and there was six Adelei penguins sitting out the front. Apparently the old Elephant seal is back after the big bliz, but I haven't seen him yet. The boys called in on the 19:00 sked and all is going OK up there. Dinner was fish & chips and that’s about it. 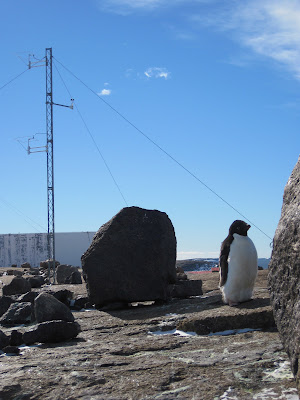 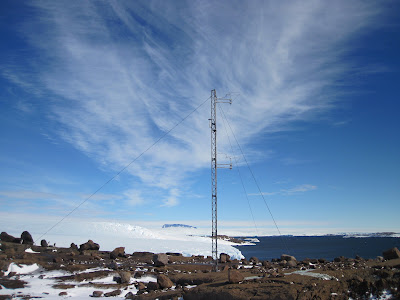