Tuesday 9th April 2013
Today, I cleared all my usual bullshit emails and there was one from Tom saying some of the information I gave him was wrong and he logged on and confirmed this. Doesn't that make you feel good after you have been trudging around in deep snow and high winds in minus twenty four. I don't think I will bother replying to that one.

Later I started work on the blue Hag with Chris giving me a hand and after lunch I had SAR training all afternoon outside in minus twenty. I had to jump start the mechies ute today as moving it out of the green shed yesterday for forty minutes while I swapped the Hag’s around was enough to kill the battery. After SAR training I completed some work on the cinema I started ages ago and then after five o'clock I spent a few hours down the transmitter shack. I missed dinner and spent the rest of the night trying to catch up on my Blog.


Monday 8th April 2013
I got really motivated and finished the orange Hag. I fixed the wiring fault and worked out how to program the GPS. We also had the usual boring Monday meeting. By lunch time a blizzard had developed and it was bitterly cold. I took both utes out of the green store so I could get the orange Hag out and take it back down to the deisos and then drove the blue Hag back up to the green store. I moved the cooks ute back in but in forty minuted the deisos ute had frozen and wasn't going any where so I had to leave it out in the blizzard. After dinner I spent the rest of the night writing up my Blog.


Sunday 7th April 2013
If it was hard getting out of bed yesterday, this morning really sucked. I listened to the alarm for about an hour and then laid there for another half hour with the lights on till I finally woke up enough to drag myself out of bed. I spent the morning working on Tom's drawings walking for an hour through forty knot winds and driving snow. At least it woke me up and made me feel alive. After smoko I cleaned, mopped and wiped the cold store as it was mine and Chris's Saturdays duties. I spent the afternoon repairing and finishing my 6m 400 watt amplifier which I hastily built in Perth before leaving. After work, I moved our drum kit from the library down to the Biscoe hut as I have had a few complaints from other expeditioners when I had the urge to play at 2am. They did say I sounded great, but it was just the wrong time of night. I figured they weren't going to get used sitting at that location so now the Biscoe hut is the music room and I will setup an amplifier as well and really get the place cranking. Funny, this room used to be where my step father Bill used to have meals and recreation and I bet I am the first to play a drum kit in there. At eight that night we watched "The thing", a legendary film about aliens crashing into Antarctica. "The thing 2 will be showing next week. Actually it was piss weak and they went around with flares, flame throwers, pistols and rifles and I spent the next few days hassling Cookie about where are all our flares, flame throwers, pistols and rifles kept and he wouldn't tell me. I'm sure he's holding back on me. 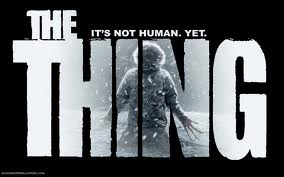 
It was a real struggle to get out of bed to go to work when I was so tired and most people were sleeping in on their day off, but I have to work the weekend paying back the two days I just had off. I cleared all my emails and all the small bullshit jobs that go along with all the emails. This usually involves walking in deep snow from one end of the station to the other in minus twenty and howling catabatic wind just to get a few readings or to trace some cables so some drawings can be marked up in Kingston while they in Kingston sip their boutique coffee and read the news paper in air conditioned comfort. I hope they appreciate the trouble I go to for them while my nose and ears are burning with cold.
I seemed to be out of sync with the whole station today and missed smoko and had a late lunch and didn't see any one till dinner time. We had a really nice dinner and after I talked to the doc and Chris till late and then latter we moved up to the bar.
At 2am I had an arranged sched with Paul from Queensland who was very keen for a contact on 160m which is the most difficult HF band. 160m is basically the AM broadcast band and is pretty close to what Mawson was using back in 1913 to make the first radio contact from Antarctica to Australia. Actually they had a relay station on Macquarie Island half way between Australia and Antarctica. 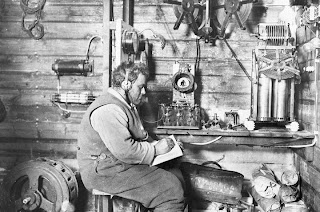 Our timing was wrong and I didn't manage to make contact with Paul, but I did make contact with four other stations in Africa, Bosnia and a couple of other places in Europe, so my 34m vertical that I ran out four ground radials is working very well. Apparently there were hundreds of other stations I couldn't hear calling me which sent the radio world into a frenzy and now they are all wanting to make contact. When I get some fine weather and some spare time I will run out a further four radials and improve the antennas performance. I pretty much fell asleep at the microphone and stumbled back to bed around 4 am.
﻿