There was a magnificent sun rise today which took my breath away and reminded me where I am as I walked to the office. 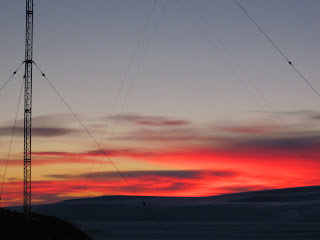 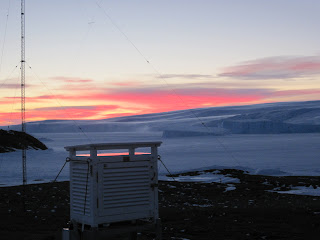 The blue Hag is still giving me grief. Now the radar won’t work and there is a problem with the HF antenna. I have been trying to complete this vehicle outside now as it is such a hassle reshuffling all the vehicles around to get it back inside the green store where the temperature is about plus one compared to minus twenty outside.
Extreme cold does weird things to materials. The copper electrical cables get stiff and brittle and can break easy, electrical tape does not stick any more, cable ties just break in your hands and are useless. Soaking them in water will help them work again. LCD screens will freeze and become useless and some electronics just refuse to work at all. Batteries will go flat really quickly and penis's just shrivel up while balls will drop off.

Have you ever tried to solder in minus twenty?
You can’t, it doesn’t work.

So back into the green store it goes again. After replacing the connector twice as they are crap cheap quality and melt as you solder them, the problem turned out to be the antenna base as well. There are two types of bases and two types of antennas and one will only work with the other. It’s nice how all the previous techs and engineers have left detailed notes behind explaining all these things as I have never come across this in over thirty years, any way its fixed now and I just have to sort out the radar tomorrow.

I was so cold after work I went straight to the spa and I laid in thirty seven degrees water shivering with goose bumps for fifteen minutes before I started to warm up. I was so exhausted I went to bed at seven thirty and still woke up tired.