Today I was determined to finish both the green and the blue hag's today and after breakfast I walked strait down to the Hag's parked down near the sea ice in minus twenty. I started up the green Hag to warm it up to drive it up to the green store and sat inside with the heater going in minus twenty. I thought I might as well warm up the blue Hag as I still had some work to do it and so I started it up then I went back to sit in the green Hag. After a couple of minutes I went back to hop inside the blue Hag and thought ah, that's funny I couldn’t see in through the windows as everyone of them was jet black, then I realised I didn’t open the exhaust hatch and the whole cabin had filled up with diesel exhaust fumes and eventually chocked the engine. I opened all four doors and let the thirty knot wind blow it all clear, but it did retain a bit of smell for a while. Oops J

I found and fixed the last remaining problem on the blue Hag. The radar was not working and I had thought this was from the extreme cold (-20c) but it turned out to be an RJ45 connector I had put on back the front using a dodgy diagram in the installation manual. I wonder how many other people have done the same thing?

I finally completed everything on the blue Hag. This vehicle has caused me so much grief and I have never experienced so many faults and problems like it before.

I repaired the wiring fault with the green Hag so the GPS and rate gyro compass were now working and then I tuned the HF antenna. I upgraded the MFD software, routes and way points and setup the display same as the other two Hags. Finally we have three fully serviceable Hag's. 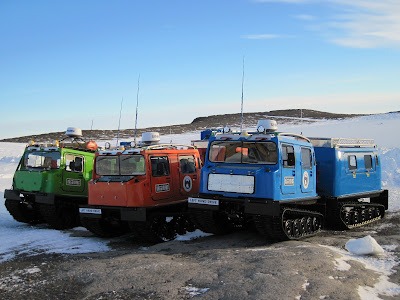 The fleet of BV-206 Hagglunds at Mawson 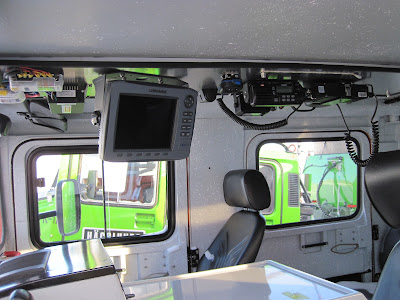