At short notice, Darron organised a trip out to climb Mt Parsons and we left Mawson about 11am and were at the base of Mt Parsons about 1:30. The trip was quite slow as there was lots of deep snow from the blizzard we had on Tuesday. All the blue ice was covered in sastrugi which is snow sculptured into mounds a bit like very bad corrugation on a dirt road. The other problem was the lack of definition due to the white overcast sky making everything look bright white with no texture making it impossible to see any bumps, hills and gully’s in the sastrugi. 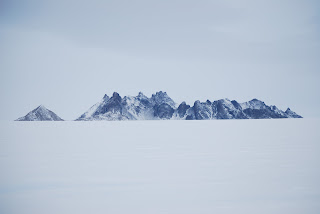 The climb to the summit of Mt Parsons was very steep and nearly all on very small and loose scree. It was hard work and very hard on the toes due to the angle. The screed was very loose and quite dangerous as we slipped and fell many times. If you lost footing you could in theory tumble all the way down. It was about minus twenty two and I was so hot and sweating a lot which was condensing on my beard and hair which can be quite annoying at times. Luckily there were no mishaps, but it took us a lot longer than we thought to reach the upper ridge line and from there it was much easier going but the snow was very deep in places, with a very large drop on either side and no margin for error. The last barrier was an ice sheet to cross with the steep scree slope on one side and a thousand plus foot vertical drop on the other side. Needless to say we were very cautious as we made the crossing, Trent taking no chances going across on his hands and knees. There after it was a short climb to the first summit where we dropped our packs and had a rest and a bite to eat. It was here that the helicopter dropped me off and picked me up about six weeks earlier. 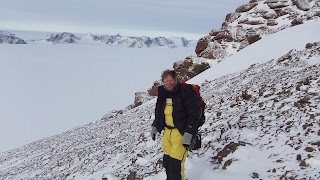 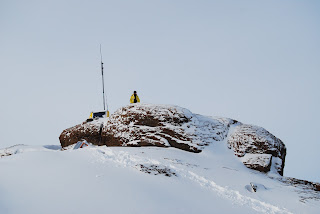 Trent on the summit of Mt Parsons 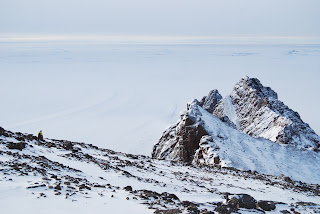 The ocean is frozen for as far as you can see 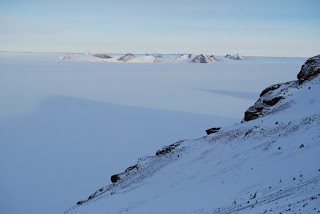 Snow covered mountains in the background 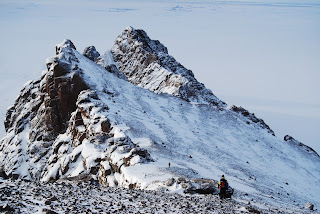 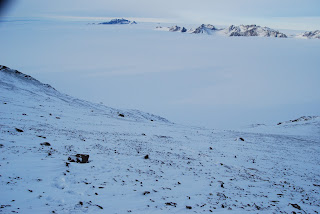 Can you see the Hag & Darron? 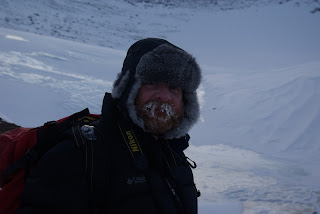 Cold and exhausted but another mountain conquered
We all took a stroll up to the real summit and took a few photos and took a look at the radio repeater, solar panels and wind generator at 1060 meters high. After about forty minutes we started the gruelling descent back down the cree slope. I stuck to the deep snow as much as I could as I found I could descend a lot faster without sliding and losing my balance as much as on the screed. The view was magnificent and I took a lot of photos on the descent. Most of the way down there was a small frozen lake which was very clear and you could see about two meters down through the ice which has fantastic cracks and bubbles rising up. Lakes are always interesting and interesting to look at.

Finally we reached the Hag and I was totally exhausted, covered in ice and looking forward to some warmth as my left hand had gone off at the summit and it took quite some time to get it warm again. I’m now using two pairs of gloves for my left hand and one on my right. This seems to be working and as soon as I feel them going off I whack on another pair or break out the heavy duty survival mitts.

We got to Fang hut late in the day and right away we cranked up the heater and the stove burners. It was great for a short time then they all went out. We tried for ages to light them again to no avail. None of the matches or candles would work in the extreme cold and the light was fading. The situation was getting serious and we considered heading back to Mawson when I realised I had turned the gas bottle off instead of on. Bloody idiot, I must have turned a thousand gas bottles on before and this time I turned it the wrong way. It’s bad enough when you start losing your hair, but when your eye sight starts to go that really sucks. (Or is it my mind?) 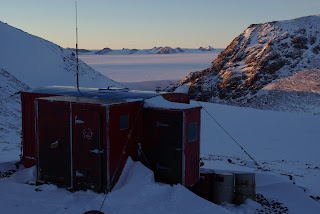 The view from Fang hut 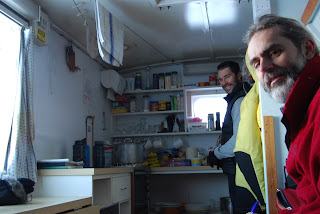 Any way we got the heater and stove going and with this we could light the candles and in no time it was raining quite heavy inside the shack. We have to melt snow to make water for cooking and drinking and snow only contains ten percent water, so it takes quite a while. After dinner we managed to dry the hut out quite well and we enjoyed a couple of beers and a nice bottle of red wine before bed. There was a nice aurora happening outside but we were all too tired to go out in minus twenty four to photograph it.

While out in the field we have to piss in a bottle and shit into a plastic bag and take everything back to Mawson for disposal. It’s really gross and quite difficult to do in the extreme conditions as you can imagine. The piss freezes right away and we empty this into our piss tank along with the grey water from cooking and washing up and this all goes into our sewage treatment plant back at Mawson.

Despite sleeping in two sleeping bags and in all my cloths I slept quite well. I think this was mainly due to the red wine.