With the Hag's out of the way I could finally start to catch up on all the small jobs that have been building up. I filed all the new drawings into the drawing folder and then I laminated the index and all the dividers. After smoko I went to investigate a possible fault with the APANSA rim heater as during blizzards we have been getting piles of snow built up on the air sample filters which take ages to melt. After tracing out the wiring I found both the rim heater and infrared heaters to be working correctly. There may be one or two faulty heating elements in the rim circuit as the bottom elements have ice on them, but I discovered during a blizzard we have to turn the infrared heaters to manual and not leave them in automatic.

I also caught up on my diary as the monthly report is fast approaching. Today the wind got up to fifty seven knots and it is now officially the windiest month of April since digital weather records have been kept at Mawson since 1990.

It was a very windy month with about average temperatures. The month was characterised by more Gales, Strong Wind and snow days than what is normally expected with a record high number of blizzards. The high amount of blizzard days reduced the amount of sunlight dramatically.

Temperatures - at Mawson during April we expect:

The average daily wind run (the measure of how many kilometres of wind pass the station in 24 hours) was 1147.9 km per day for the month. This is above the long term average of 944 km per day.

Blizzard conditions were recorded on 10 days for April, with 3.6 expected. We are on par with a long standing record of 10 blizzards during April 1996. A total of 17 blizzards for 2013 so far.

There were 21 gales compared to 13.8 expected for April, 29 days of strong wind, with 26.6 the average. 15 days of snowfall were observed, well above the expected average of 4.6 days.

Daily sunshine at Mawson for April averaged 2.2 hours per day which was well below the expected 3.9 hours.

In general April was in line with the long term mean temperatures. We had 20% more wind then expected and the amount of days of blizzard, blowing snow and snow fall were well above the average resulting in only 64.8 hours of sunshine for the month. 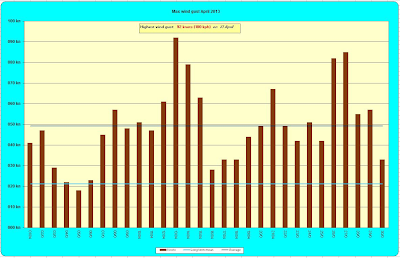 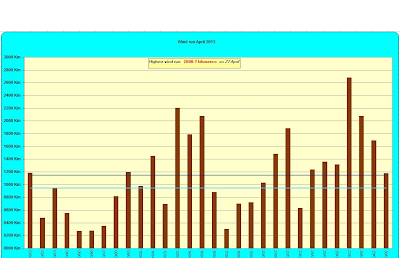 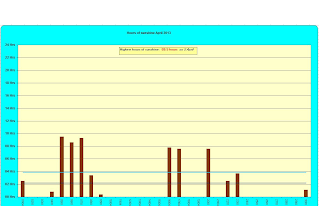