Today was an absolute perfect day, with no wind. John asked me to go up on the plateau with him to replace canes, but first we had to deliver a trailer load of aircraft fuel to the Rumdoodle blue ice runway. Geoff and Jeremy where towing another load of fuel to the same location and we left in a convoy. We reached F14 at the Rumdoodle blue ice runway and dropped off our fuel and the trailer Geoff and Jeremy towed up and secured it with an ice anchor. Geoff and Jeremy headed back to the station while John and I headed back slowly replacing all the canes every 700 meters.

It was hard work but quite pleasurable and satisfying. We cut off and removed all the broken, damaged or moved poles. The ice sheet travels about 20 meters a year up there so many of the canes have to be moved each year. We also retrieved three old drums that pose a hazard in white out conditions. These drums were used to mark the routes before GPS and most of them have moved way off the routes and are completely frozen in and most are impossible to remove now.

At about F11 we came across some old crossed canes only about 50 meters from the route which indicates danger. We walked over to investigate and found a bottomless 1.5 meter wide crevasse. I would hate to drive or fall through that sucker. The job of replacing canes is quite simple, first we cut off the old cane pole or stub and then drill a new hole. The new cane is placed about a meter down into the hole and then water is poured in to freeze it in. We did this for about 16 kilometers all the way back to the station arriving just in time for dinner which was Indian and very nice. 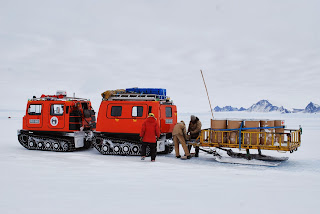 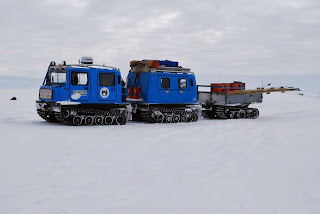 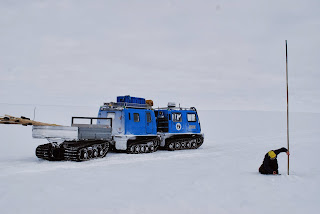 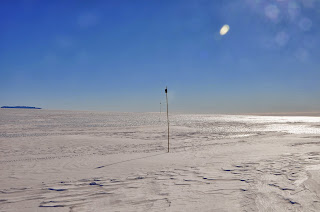