This morning I was woken from deep sleep by a fire alarm in the smokers hut. I wasn't amused and I staggered out looking like a greasy cave man to see what was going on. Peter C and I went out to investigate and when we opened the door we both nearly threw up with the filthy stench. There was no fire unfortunately, Keldyn had turned the heaters on to melt all the snow and an over temperature detector had gone off when it reached about thirty degrees. Thanks Keldyn you mongrel. We reset the detector and stood everyone down. I think I went back to bed for a few more hours after that. Again it was another beautiful day and I really felt guilty spending time indoors down the transmitter building. I had wanted to go tobogganing over west arm (even though it’s against the rules, yes true) but no one was interested. Next time I will go on my own. Anyway propagation was superb once again and I spent a few hours clocking up a couple of hundred more contacts. Later, after chomping on some scraps I managed to slap together we watched the worst movie ever. I can’t even tell you what it was as I’m still trying to erase it from my memory for ever. Thanks Lloyd. 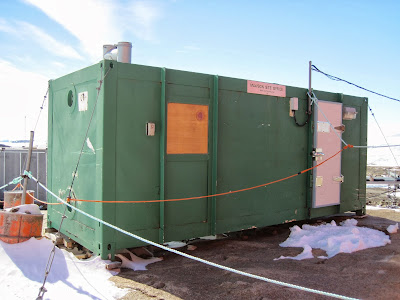