Today I had to do my monthly report so I locked myself in my room all morning until I had it completed. It was such a beautiful day with full sunshine and very little wind by the afternoon and it was such a shame to be working indoors. Late in the afternoon I went down to the transmitter building to see if there was any activity on the bands but as expected, there was a complete radio black out due to the high level of solar activity.

IPS GEOMAGNETIC DISTURBANCE WARNING 13/27 CORRECTION ISSUED AT 0124UT/02 OCTOBER 2013 BY THE AUSTRALIAN SPACE FORECAST CENTRE.
A 35 degree filament erupted from the northwest quadrant of the Sun late on 29th September with an associated halo coronial mass ejection (CME). Ejecta is expected to arrive at Earth late in the UT day, 02 October to early on 03 October.

This means good conditions for auroras over the next couple of nights. It might also be best to stay indoors as much as possible to limit the amount of cancer causing charged particles smashing through you body !!

Just for something different;

On the large rock down below the mechanical workshop are painted the words “Stor Klippe”.

The language is Danish, most likely from a crewman on one of the four Dan ships that resupplied Mawson from the fifties to the eighties. (Kista Dan, Thala Dan, Magga Dan and Nella Dan)

In Danish,“Stor Klippe” translates to "large rock", which shows that the painter had a sense of humour. 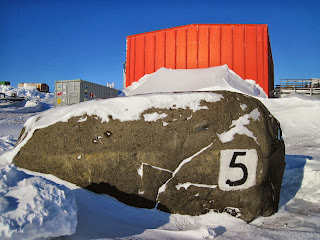