Today was a beautiful windless day with the sun shining and blue sky. I decided to collect all the old redundant material from down in the transmitter building and bring it all back to the green store to pack into a cadge pallet to send it back to Kingston. I drove the ute down there and it took me about ten trips to get everything loaded. Half of the material was Andrew 10kW copper hardline that was installed back in the 1960’s when all messages sent and received was by 10kW HF telex.

This all had to be stripped of all contaminants, cut to length and sorted into different metals such ad copper and brass. This took me pretty much all morning and after I had all the paper work done I was pretty knackered. There was about 300kg of copper all up. After lunch while I was still in the mode I got stuck into the Telecoms workshop and threw out a heap more stuff, crap that hasn't been used in years like floppy disks and spare parts for equipment that was removed a decade ago.

After work I went down to the lovely clean transmitter building to see what the bands were like. There was pretty much a radio blackout due to the current solar storm but I still managed to work a few Japanese stations via JT63HF. Trent cooked schnitzels for dinner and they were great. Latter I spent the rest of the night getting my blog up to date. 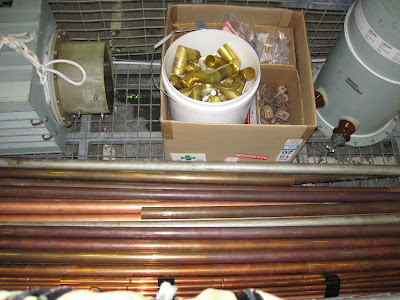