It was another nice day and I'm really enjoying these barmy +3c degree days and I haven't had to wear my jacket and gloves for weeks now, it's bloody great.

This morning I threw two more Nelly bins full of gravel on the snow around the ANARESAT building to try and melt the snow and ice away. It really needs to be dug out with the excavator but at least this should speed up the melt process and might help prevent the new guys next year having to dig it out every time they need to enter the building. I'm also concerned the blue ice will eventually engulf the whole building if nothing is done about it. No one seems too excited about it, but at least I'm doing my bit.


This month’s Australian Antarctic Magazine - Issue 25: December 2013 featured a story about my achievements using moon bounce from Antarctica. You can view it online at :

Either down load the magazine or go to “Technology” and click on the link for “Moon bounce from Antarctica”. We knocked off early today and enjoyed a few beers out in the sun before dinner which was fish & chips. Later we watched a movie called “Bad Santa", and yes he was a VERY bad Santa. 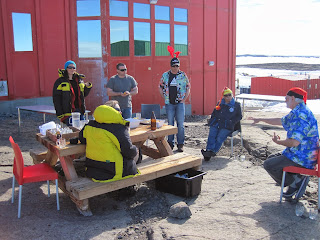 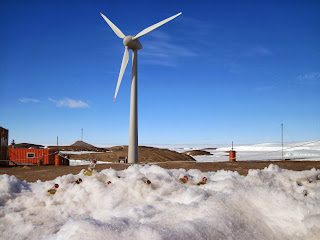 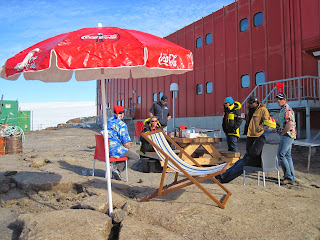