Aledgedly the original freighter hut was placed at Rumdoodle in the late '50s or early '60s, when the RAAF used the nearby ice as an airstrip. 1960 was the year of the Dakota, and it made many flights from the area.

Ledgeond has it that in 1972 a field party arrived to find that the hut had disappeared. Fragments were found scattered around the rocks, and it is believed that a great gust of wind picked it up and smashed it to pieces. There are still pieces of the van jammed up in the cliff faces, and in a good summer all sorts of debris can be seen along the walls. The 1987 party supposedly cleaned up the area and burned the remains on the East Arm tip.

The Division made up a prefabricated hut and it was delivered to Mawson early in 1973, assembled and fitted out by Bill Cartledge the chippy, and painted inside by Basil Rachinger, the OIC. It was towed into position at Rumdoodle on 16 August 1973, and the following day a brass plaque was unveiled on a huge erratic, or boulder, just to the west of the hut.

It is interesting to note that the boulder stood, displaying the plaque, right up until 1986, the year the hut was replaced. But the very year of the hut's removal, the boulder toppled over, completely concealing the plaque. The plaque is now covered by tons of rock, and will probably never be seen again.

In 1984 the hut was taken to Mawson for an internal refurbishing and then towed back and simply laid on timbers on the rocks and guyed down. This is a certain recipe for disaster, as the site is subjected to very strong winds which plummet down the sheer faces of the massif. It was nearly torn from its mountings by the wind, but was fortunately removed by the 1986 party before it was lost to the elements.

A hut constructed at Mawson in 1986 was originally intended for the Taylor Glacier area down the west coast, but when the proposal was rejected the hut was placed at Rumdoodle, and became known as "Maxine's". The carpet came from the Met shack at Mawson. 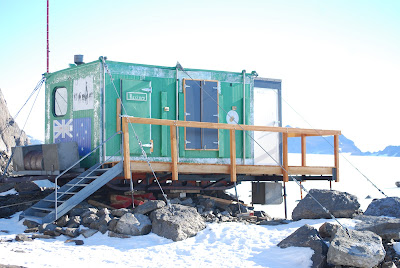 The triple-glazed picture window was to be part of the new Casey living quarters, but was the wrong size. It mysterisly made its way to Mawson and was put it to very good use. The sledge on which the hut is mounted originally carried the old field workshop generator van, which is still at Mawson, and which has done many thousands of miles in its day. 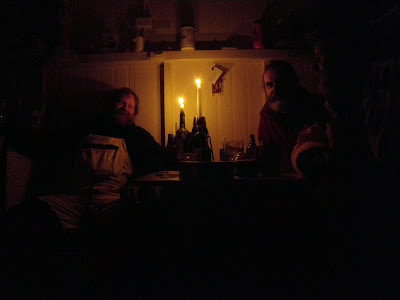