Our stay at Rumdoodle hut was quite pleasant. This is a pretty good hut with a bit of room to move. I enjoyed a nice meal of pastor mornay that I had cryo vacuumed and I just boiled it up still in the bag in some melted snow and ate it directly out of the bag with a bottle of nice red wine. It was very cold but we had both the heater and stove blazing away which warmed up the hut pretty quickly. I slept fully clothed inside two sleeping bags and was warm as toast. We enjoyed a nice sleep in as the sun doesn't come up till about nine thirty, then we had breakfast, a coffee and then hit the road. 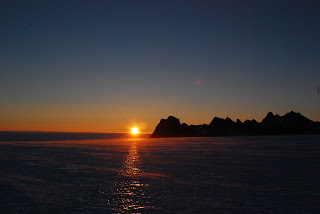 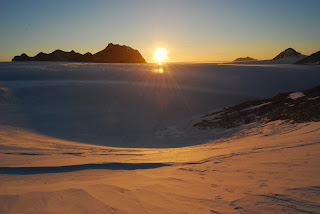 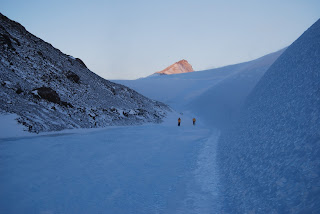 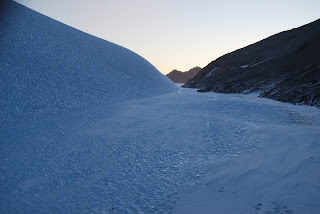 The plan today was to check out a few wind scours we had driven passed yesterday and just to explore a bit more around the Central Masson Range. Our first stop was at the base of Ferguson Peak. (900m) We followed the wind scour in an anti clockwise direction which was very spectacular yet bitterly cold. There was bliz drifting along the ice and the whole ground looked like it was moving. The further south we went the stronger the wind got as it funnelled through the scour making conditions quite extreme for us. 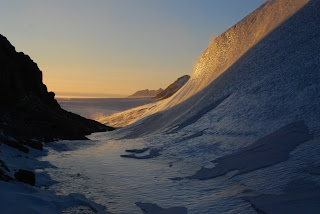 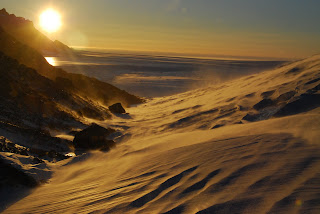 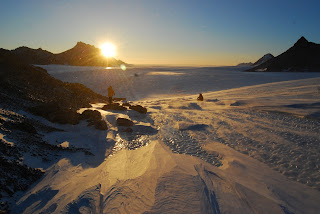 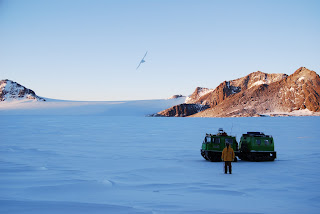 We finally rounded the scour and started to head back north towards the Hag and the views were magnificent and we all took many photos. This time I was wearing my bear paw mitts with my gloves on inside and my hands were much warmer but they are very awkward for carrying things. Once again during the descent Lloyd and I did some sliding down the ice and had a lot of fun. Lloyd is our doctor and he has made many trips down south in his seventy odd years. He is very fit and in great shape for a man of his age. 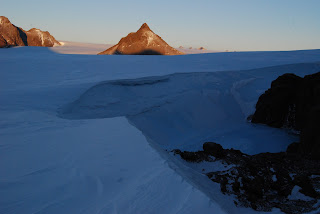 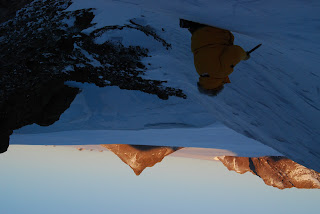 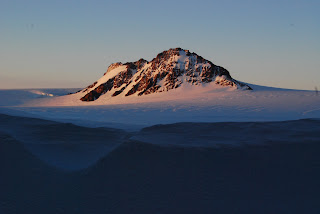 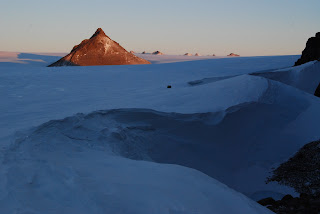 Finally we reached the Hag and then headed over to the back of Mt Ward (976m) to explore another big wind scour. It was a very long and steep walk down into this scour with a lake at the bottom. For quite a distance Lloyd and I slid down the ice once again, and I was on my back head first and it was such an amazing view I even took a photo of it. There were lots of snow pidgins here nesting and one was swooping us for a while to try and make us move on. 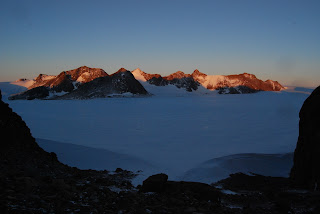 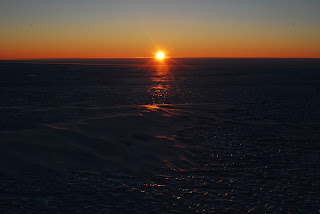 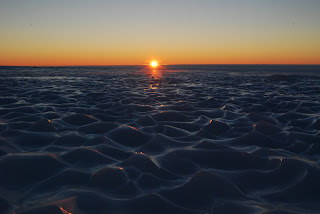 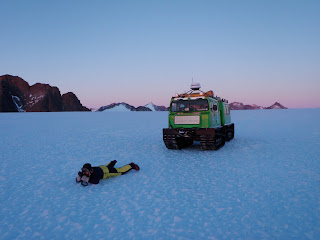 The lake was quite interesting with lots of cracks and frozen bubbles and you could see about a meter down through the ice and see rocks and boulders frozen down in it. After the long steep climb out Lloyd had had enough and headed back to the Hag for a rest while Darron and I climbed down into another scour and then we climbed high up onto a ridge to admire the view and to take a few more photos. 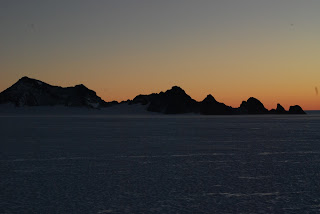 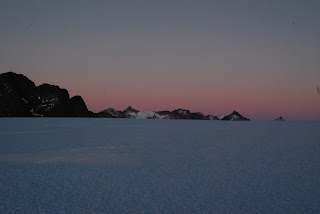 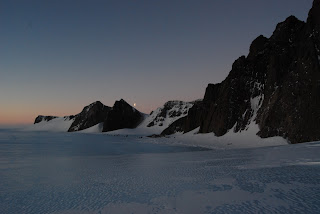 On the way back down Darron decided to be adventurist and he slid down on his bum. He went so fast he lost control and skidded sideways into some rocks and I held my breath but he stopped OK and said he didn't hurt himself. When it was my turn I was over cautious and had a fairly lame slide down on my bum, then it was a long walk back to the Hag.

The sun by this time was getting low so we decided to start heading back towards Mawson and maybe if we have time to check out the northern face of the North Masson Range. As it turned out, after numerous photo stops, we ran out of day light and decided to keep heading back to the station into the setting sun with beautiful reds and yellows while behind us was beautiful moves, pinks and purples. 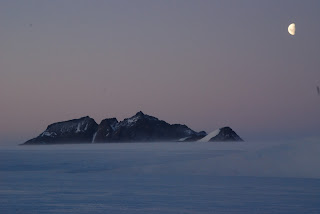 We got back to the station around three thirty and after the usual clean up, pack up, refuel etc we all enjoyed time out relaxing, doing our washing, having dinner and a few drinks chatting about our great two day adventure. 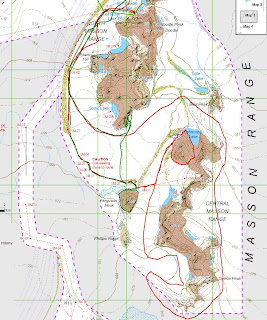 
Our route over the last two days. Red on Saturday and green on Sunday
﻿
Posted by Craig Hayhow at 06:36