Today when I got up there was no wind and it was fantastic and really raised my spirit. I spent an hour and a half digging out the ANARESAT equipment room that was buried up to the top of the door. I had to also cut steps into the snow drifts on the way back. I got so hot digging the snow I took off both my jacket and hat and on the walk back to the red shed I felt ice in my hair which is nothing unusual but when I took my glove off and felt my left ear lobe I was shocked to feel it was frozen solid. My ear was frost bitten and I had to get inside as quickly as possible and thaw it out. I went back to the red shed and jumped strait into the shower. My ear seems to be fine but I need to keep a close eye on it over the next week in case it blisters up or starts to die off. I need to be more careful in the future, but the trouble is when you exert yourself it is so easy to overheat in Antarctica.

After lunch I rearranged several bliz lines that were blizzed over and ran several new ones. After this I was sweating profusely and totally exhausted so I went back into the operations building and replaced two VHF radios with the new model. The sun does not come up now till about nine o’clock and it sets about four thirty which is rather depressing but I will have to get used to it as its only going to get worse. My body clock is a bit messed up and I really struggle to get out of bed now. 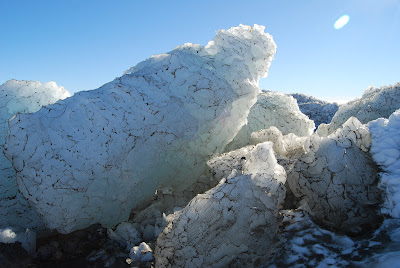 Some interesting dirty ice that caught my eye
Posted by Craig Hayhow at 08:17