Today around nine o'clock Luc and I headed off up the plateau to the Southern Masson range where I haven't been before. The trip up the plateau was pretty exciting as even though the snow had a solid crust on it, there were numerous melt streams to cross over. At first I took it very cautiously as I didn't know how the Hagglunds would handle the fast flowing streams but I needn't have worried as it just cruised along without a worry. These vehicles truly are an all terrain vehicle that can go almost anywhere.

Once we levelled out the surface became very water logged and sloppy yet the Hag showed no sign of slipping of loosing traction even when we broke through some really deep holes. We pulled in at Rum doodle hut as Luc was hungry and wanted to have a smoko. While Luc was having a brew and a bit of a chomp, I was outside scouting around at one last attempt of finding the old Rum doodle rock once again without success. After a while Luc joined me and we came to the conclusion the rock had been bulldozed into a pile next to the present day shack. It was amazing to compare the 1960 photographs with today’s landscape. All the glacial erratics in the moraine line at Rum doodle had moved about ten meters and some had toppled over or sunk into the blue ice.

While poking around I sighted something unusual under a large boulder. It looked like a wooden box and I started to dig it out. Finally I got it out and it felt like there was a bottle inside. I was thinking 1960 vintage whisky or grange and we excitedly took it back to the shack to try and get the screws out. It took a while but we finally got it open and removed all the insulation only to be let down by a Bundy bear on the cap. There was a note inside and it was only stashed February last year. We added our own note and contact details and re-stashed it concealing it a bit better than it was previously.

The lake in front of the hut was now liquid and we had to walk a long way around back to the Hag.

From Rum doodle we headed off down the S-cane line in unfamiliar country towards the Southern Massons. The blue ice was now all white and the higher we got the melt stopped and we had to contend with stastrugi. We crossed the main moraine line that is usually completely covered by blue ice and it was open in places allowing you to see all the boulders, rocks and millions of tons of gravel. It’s really amazing how all this is just flotsam floating down a current in a slow moving ocean of ice. Finally around midday we picked our way through small slots and entered the Southern Masson’s. It’s quite a small range but very divers.

We first went to a huge wind scour on the Northern most point of Trost peak at 937 meters elevation. There was a frozen lake at the bottom with a waterfall coming down the top of the wind scour flowing under the lake. We climbed to the top of the scour and looked back to a magnificent view. I was being cautious and parked the Hag at the entrance to the scour but I could have driven it all the way down to the lake. On the drive in I stayed on the blue ice where I could see all the slots to avoid them, but on the way out I decided to drive on the snow for better traction on the steep descent and all of a sudden there was a loud bang and a big jolt as the ice collapsed out from under us as we broke through a small crevasse. I drove out of it and pulled up for a look and a few photos. It was a good wakeup call how easy it is to get gobbled up by one of these bottomless monsters.

Without further incident we travelled to four other peaks and several wind scours circumnavigating the whole range. At one stage I got a bit too close to a massive ice cliff realising at the last minute and turning away. It is nearly impossible to distinguish a cliff, wave or a slope in the ice as it’s all the same colour and texture and you have to be spot on with your navigation and awareness. A couple of times Luc sent me towards these obstacles just as a joke and to see if I was switched on or not. At six o'clock instead of climbing the majestic 970 meter high ridge, we had had enough after all the steep scree slopes we had been climbing all day, so I drove around the back to the polar side and drove up within ten meters of the summit and then just walked up. It was a spectacular view and we sat there for forty minutes taking it all in. Finally we rounded the Northern end of the range to where we started from and headed back towards Rum doodle.

After the days warm sun the whole trip back was through slosh and melt water and fast flowing streams. Once again the Hag performed flawlessly. We pulled up at GWAMM for drinks and nibbles next to a melt stream for an hour or so till almost ten o'clock and it was a fitting way to end such a magnificent jolly. We rolled onto station right on ten o'clock, sunburned and exhausted but with a grin from ear to ear after such an awesome day. 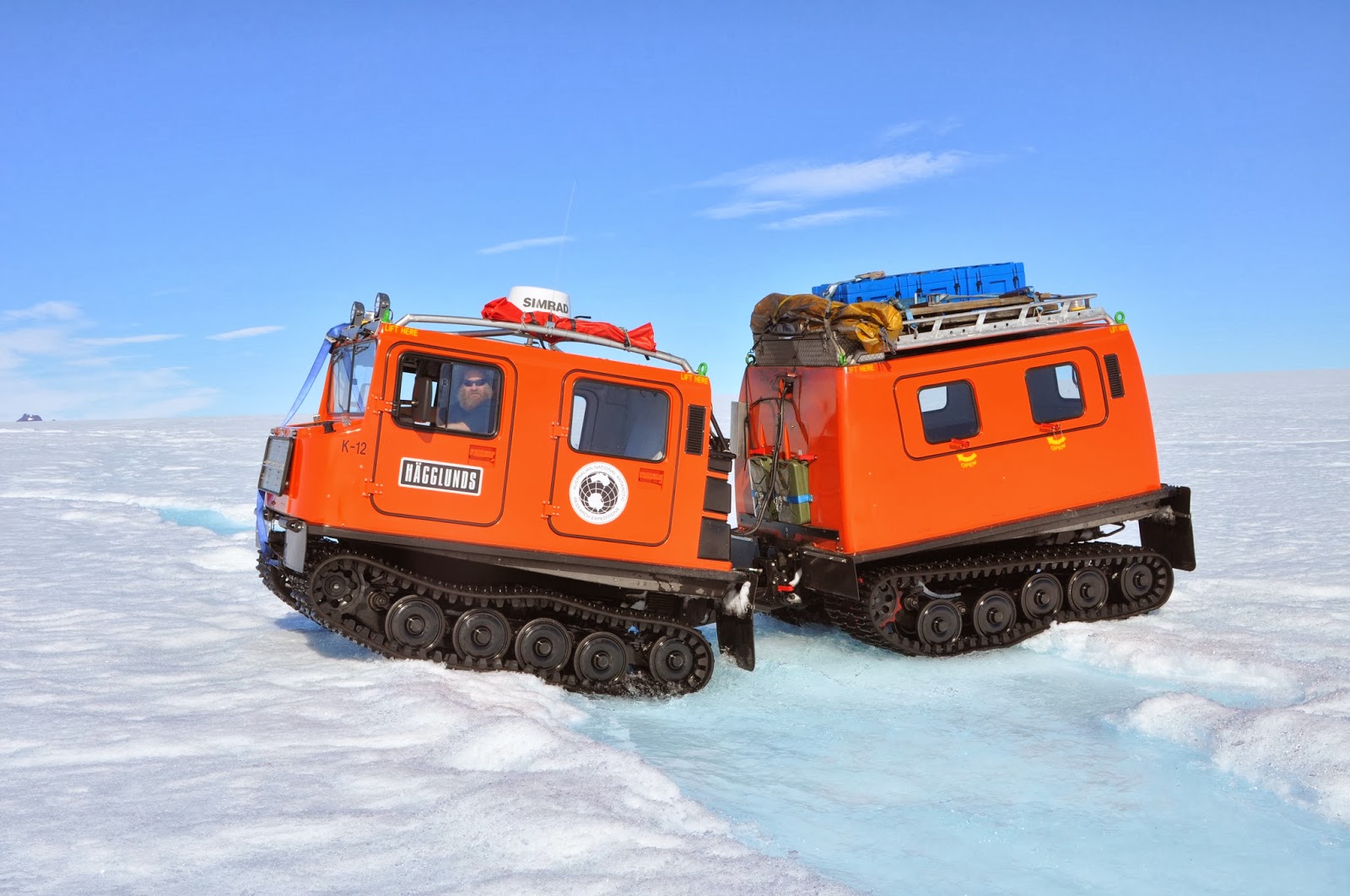 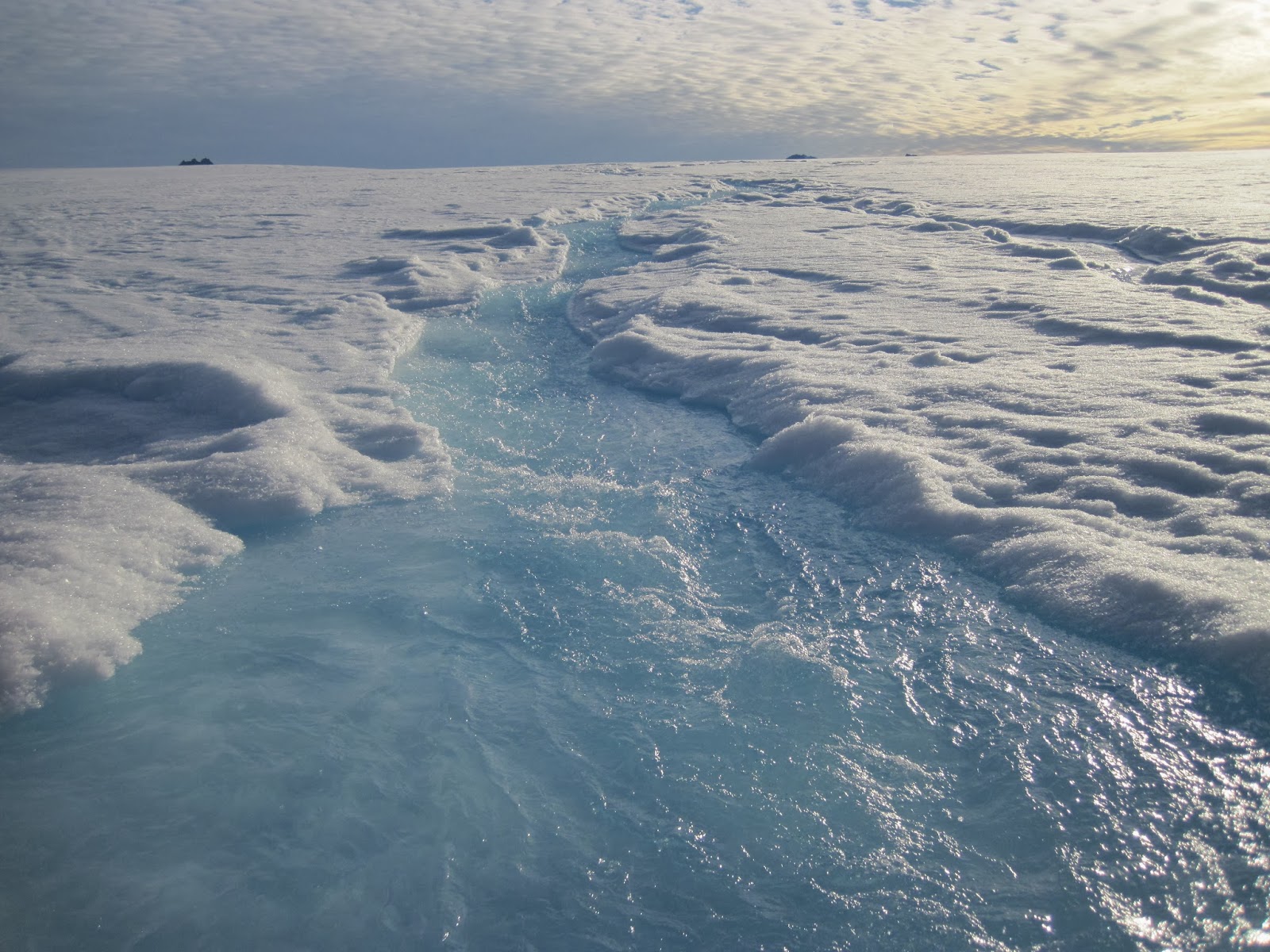 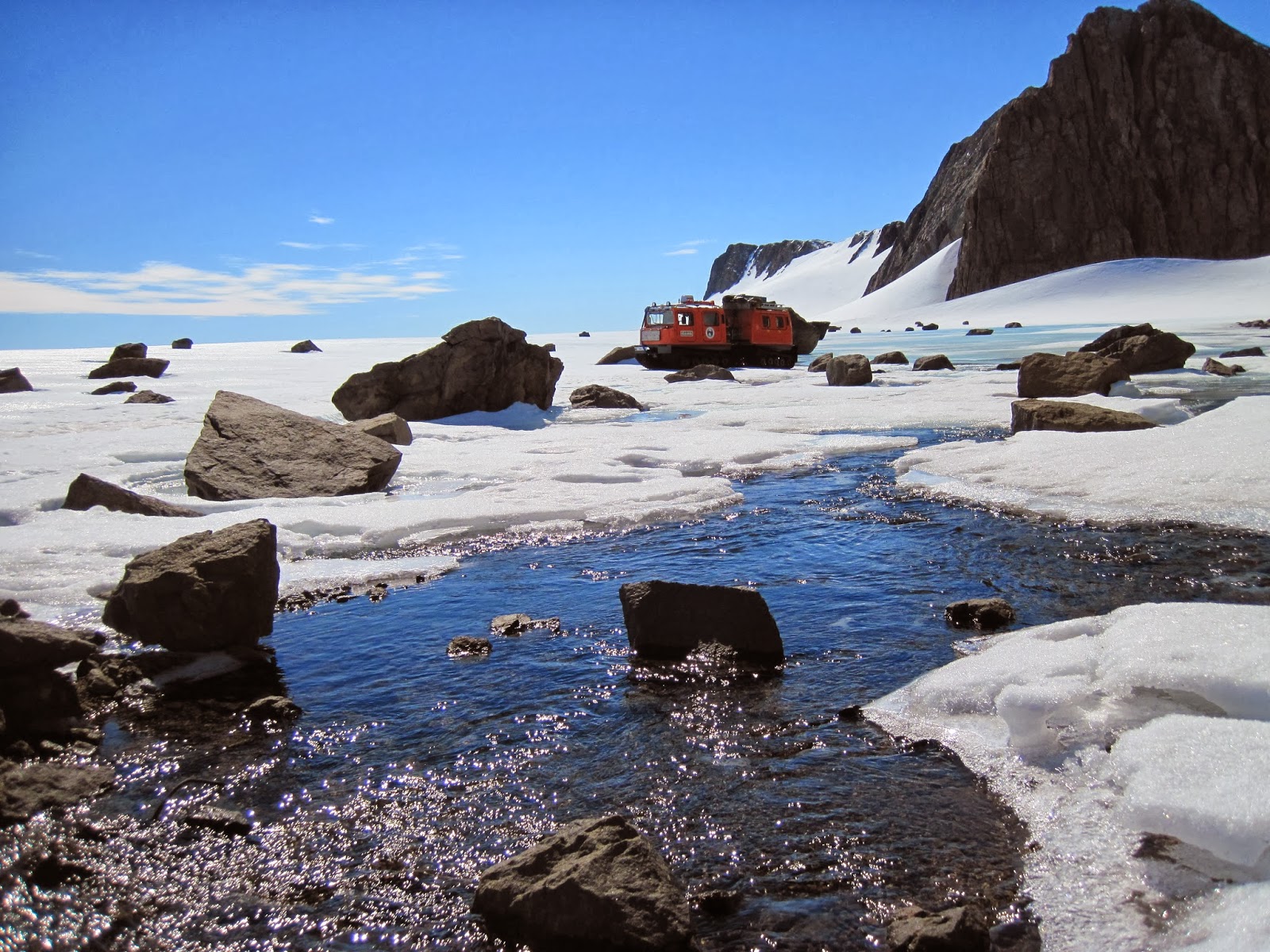 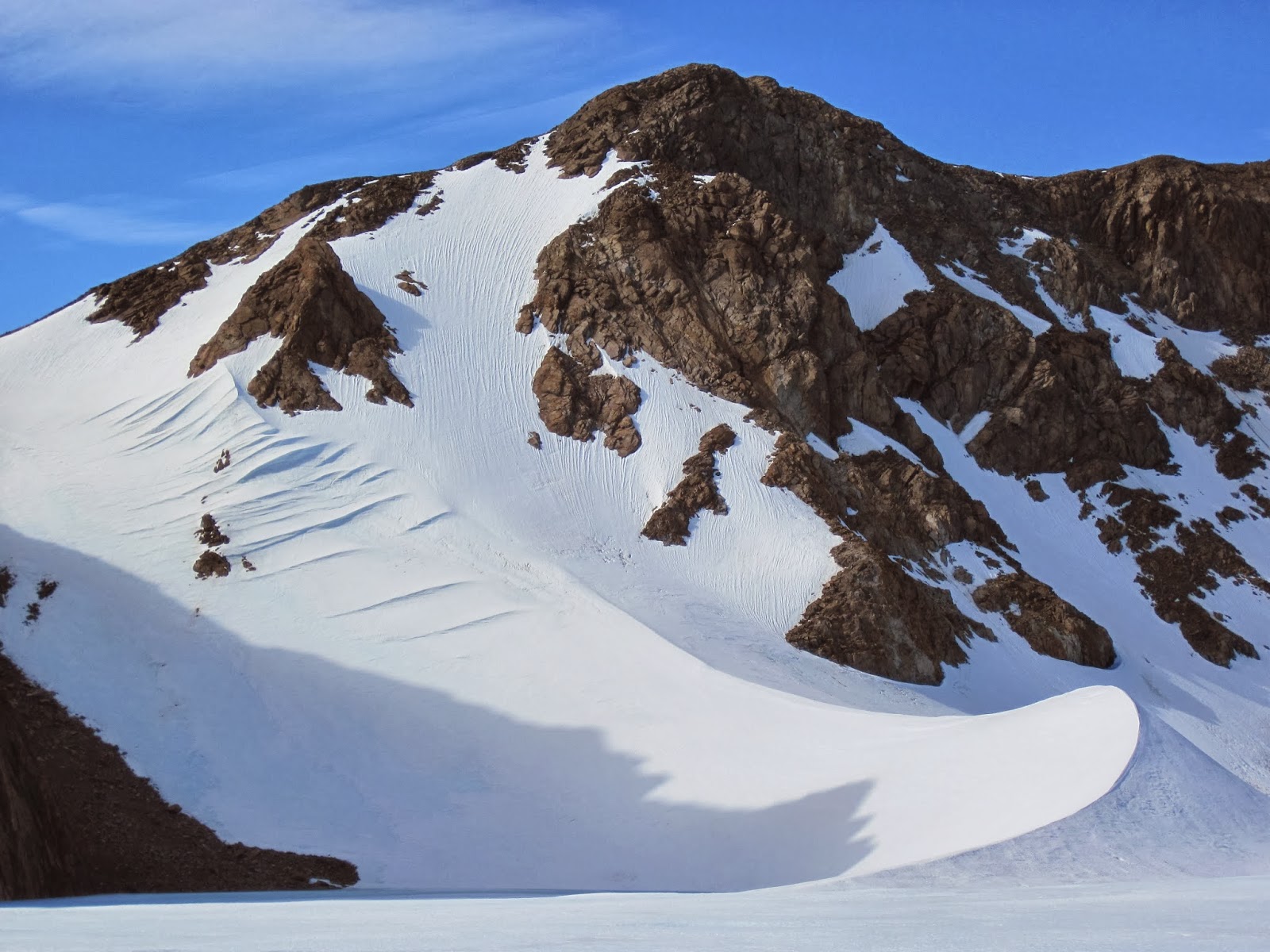 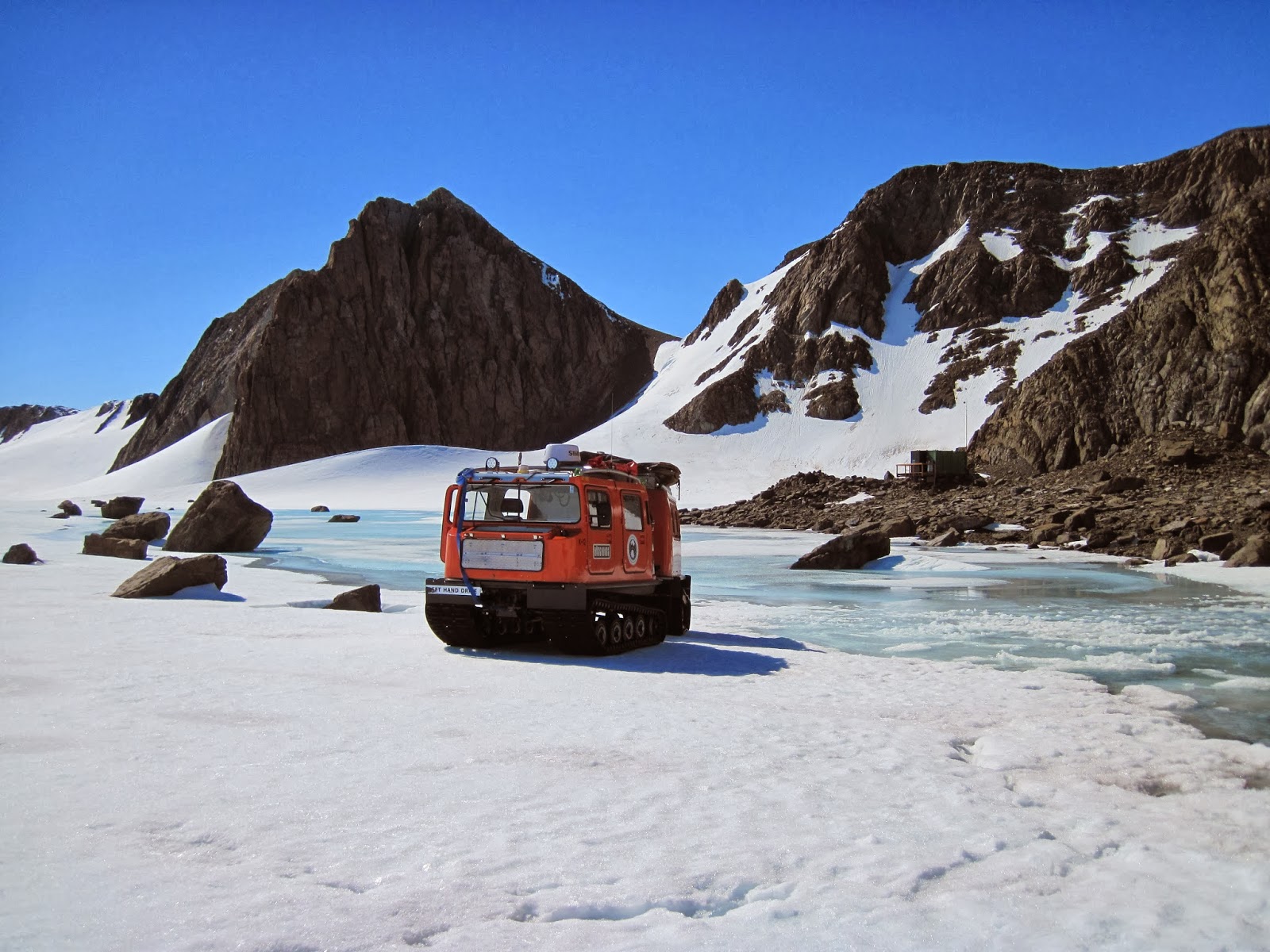 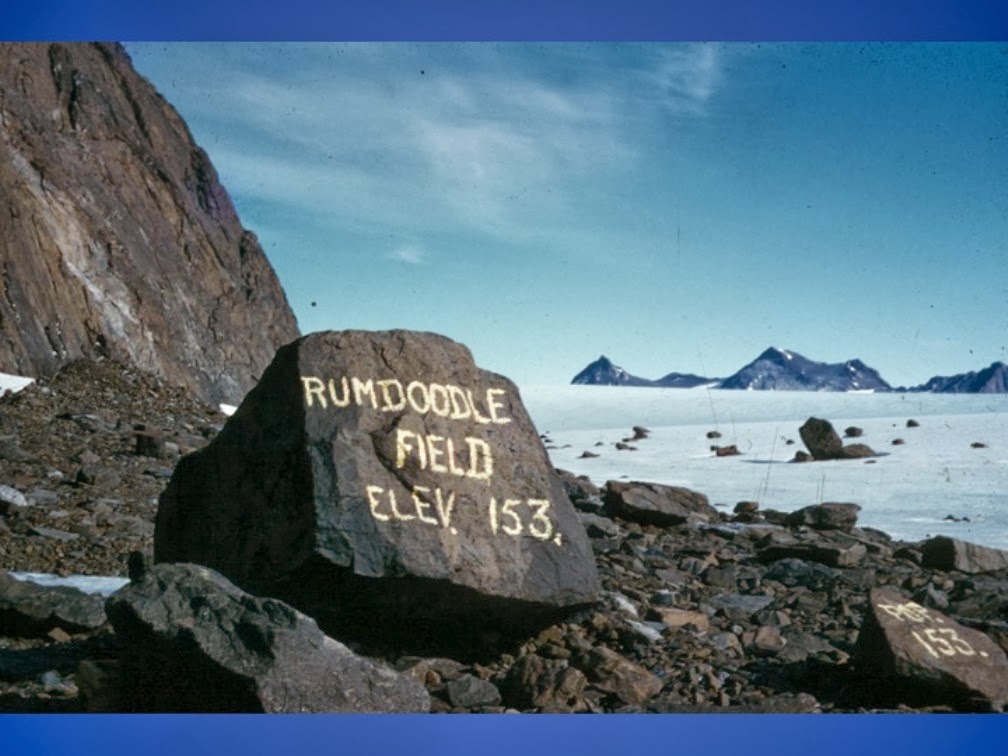 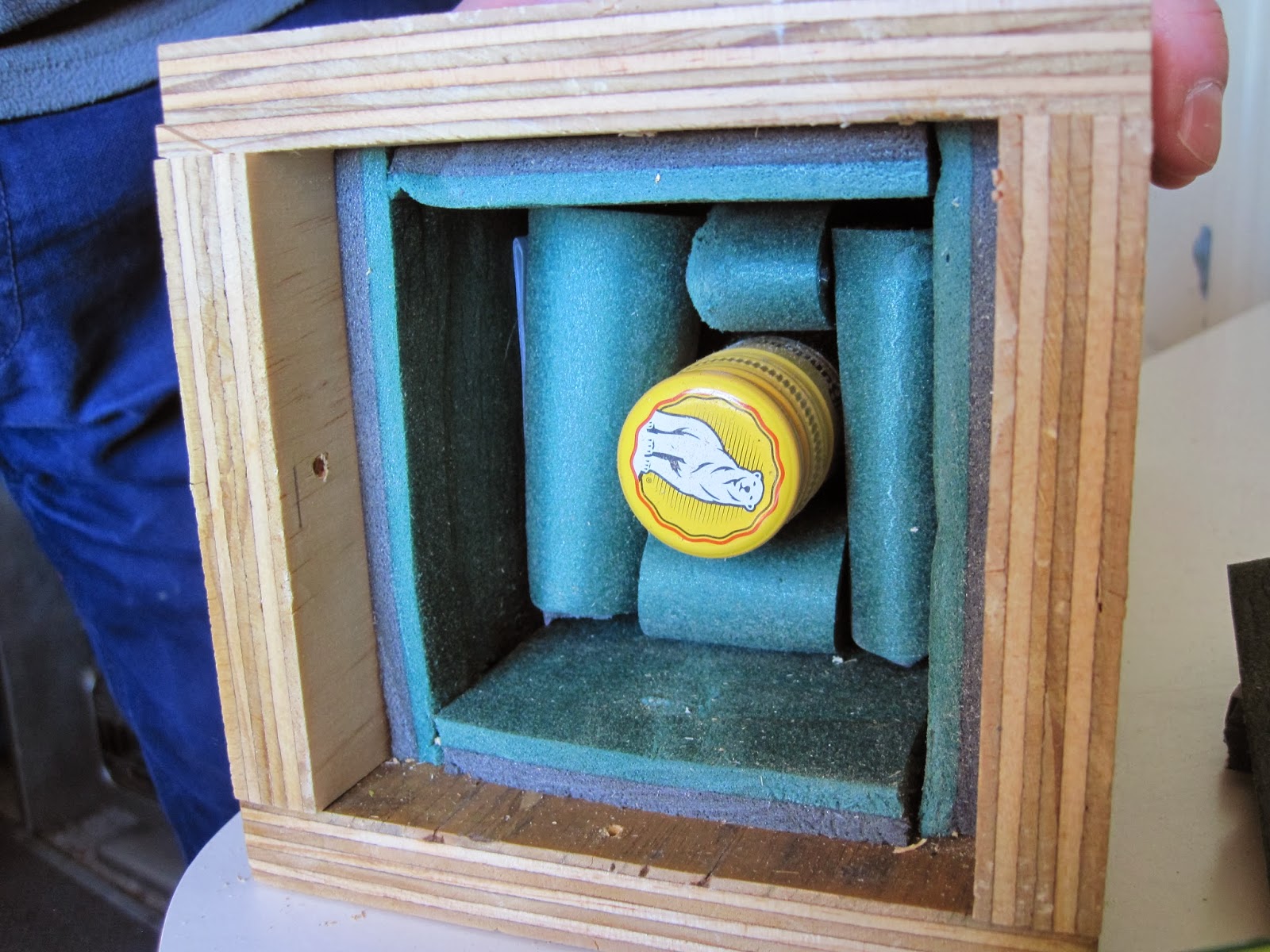 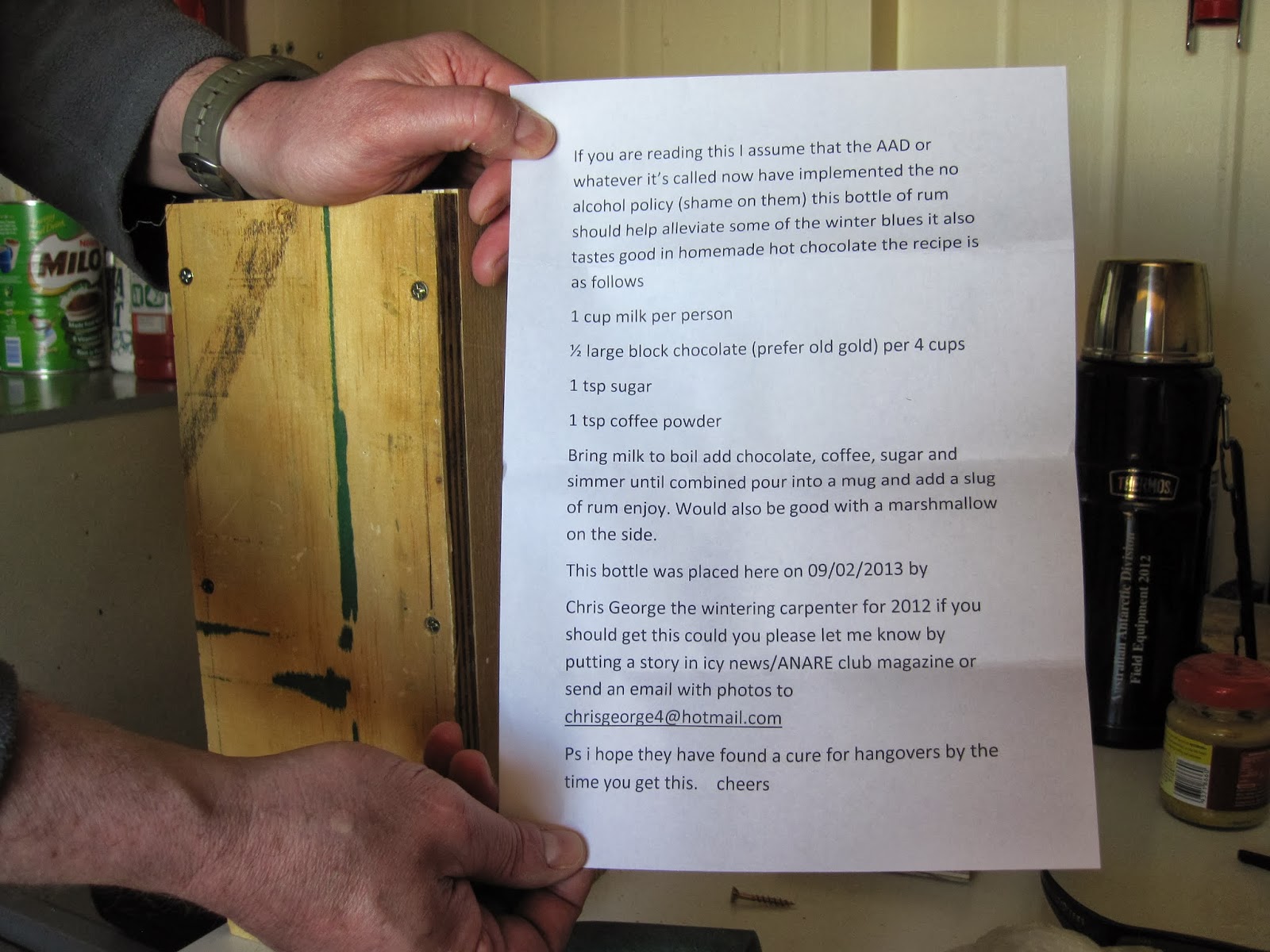 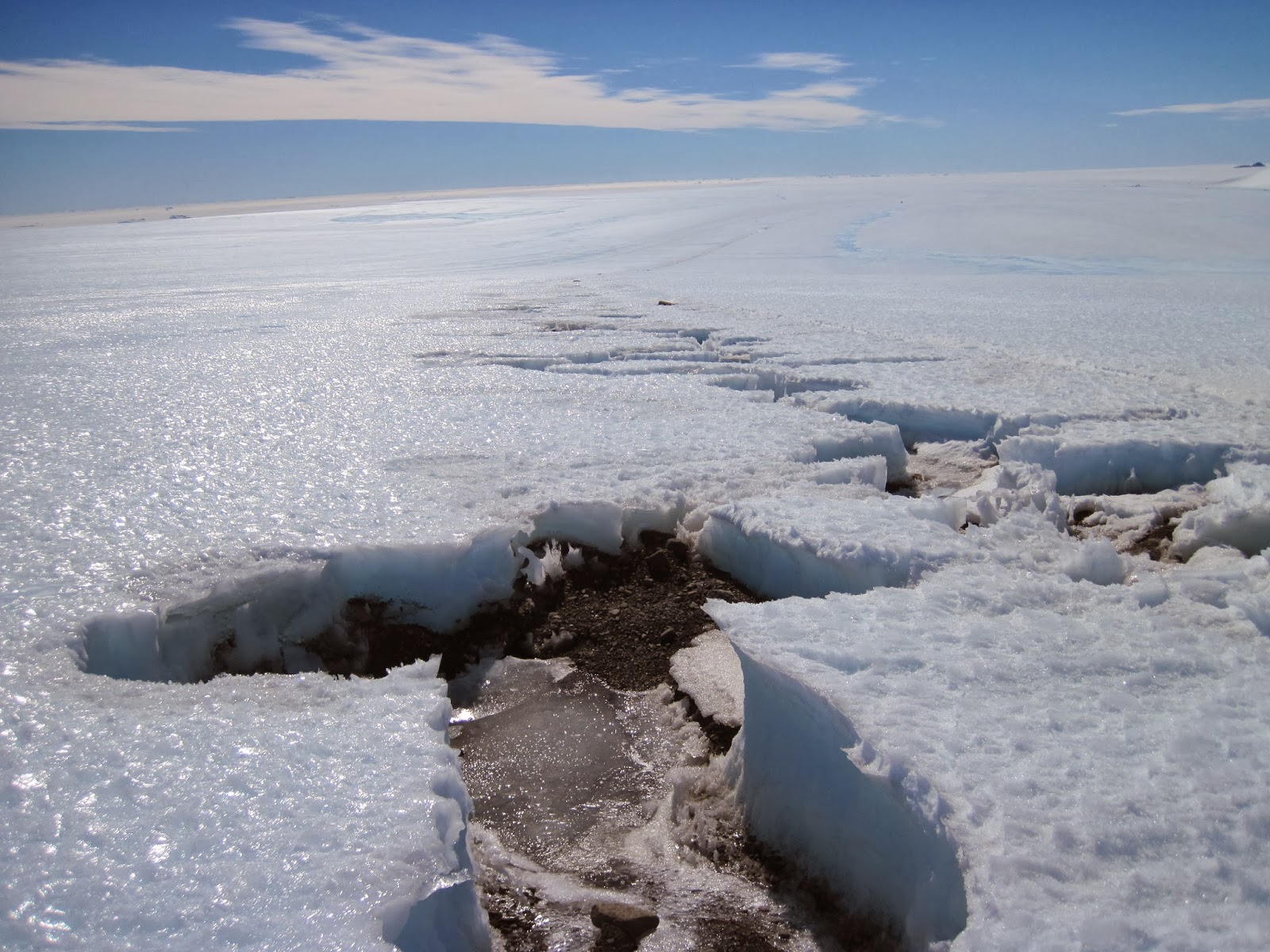 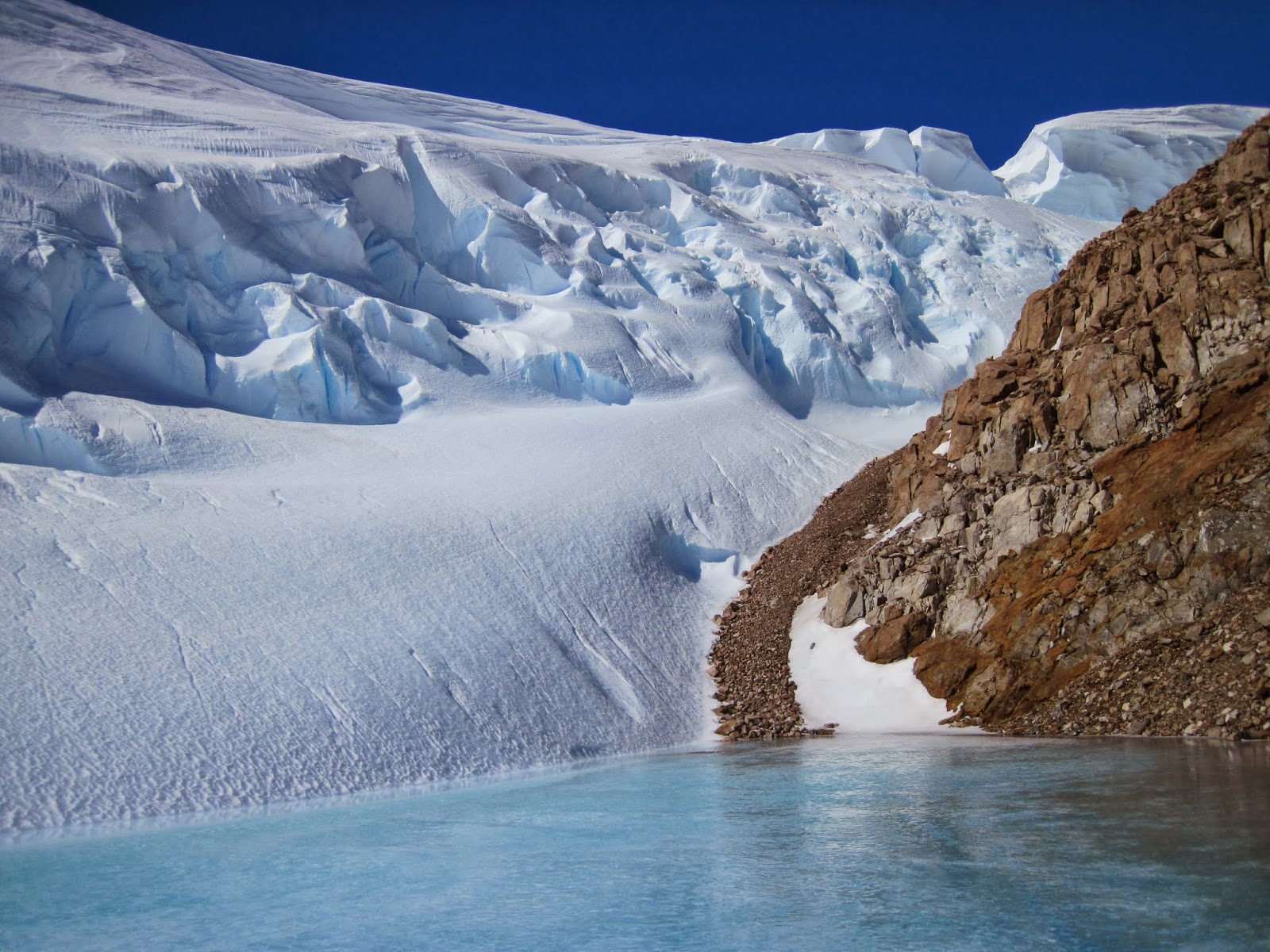 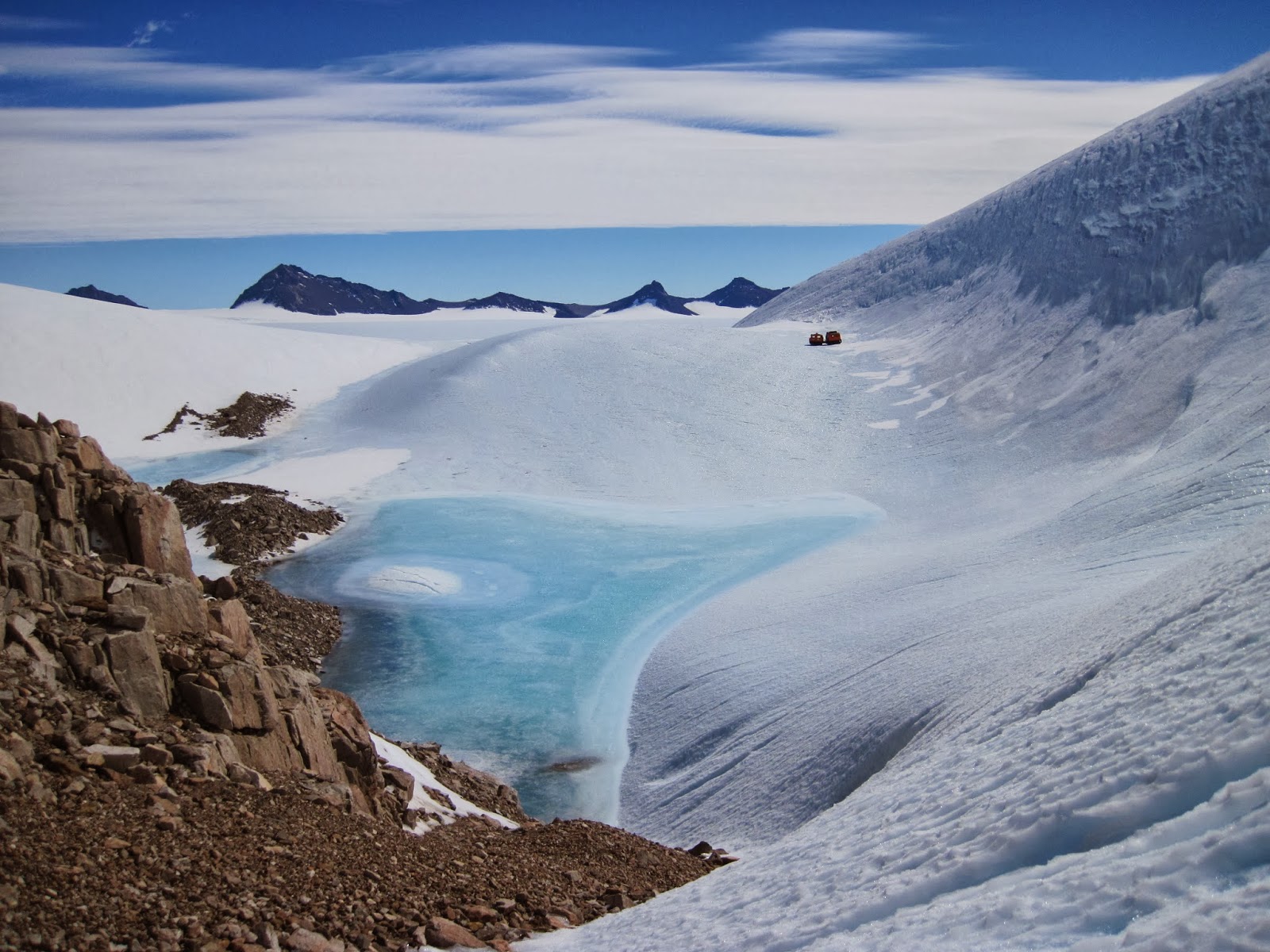 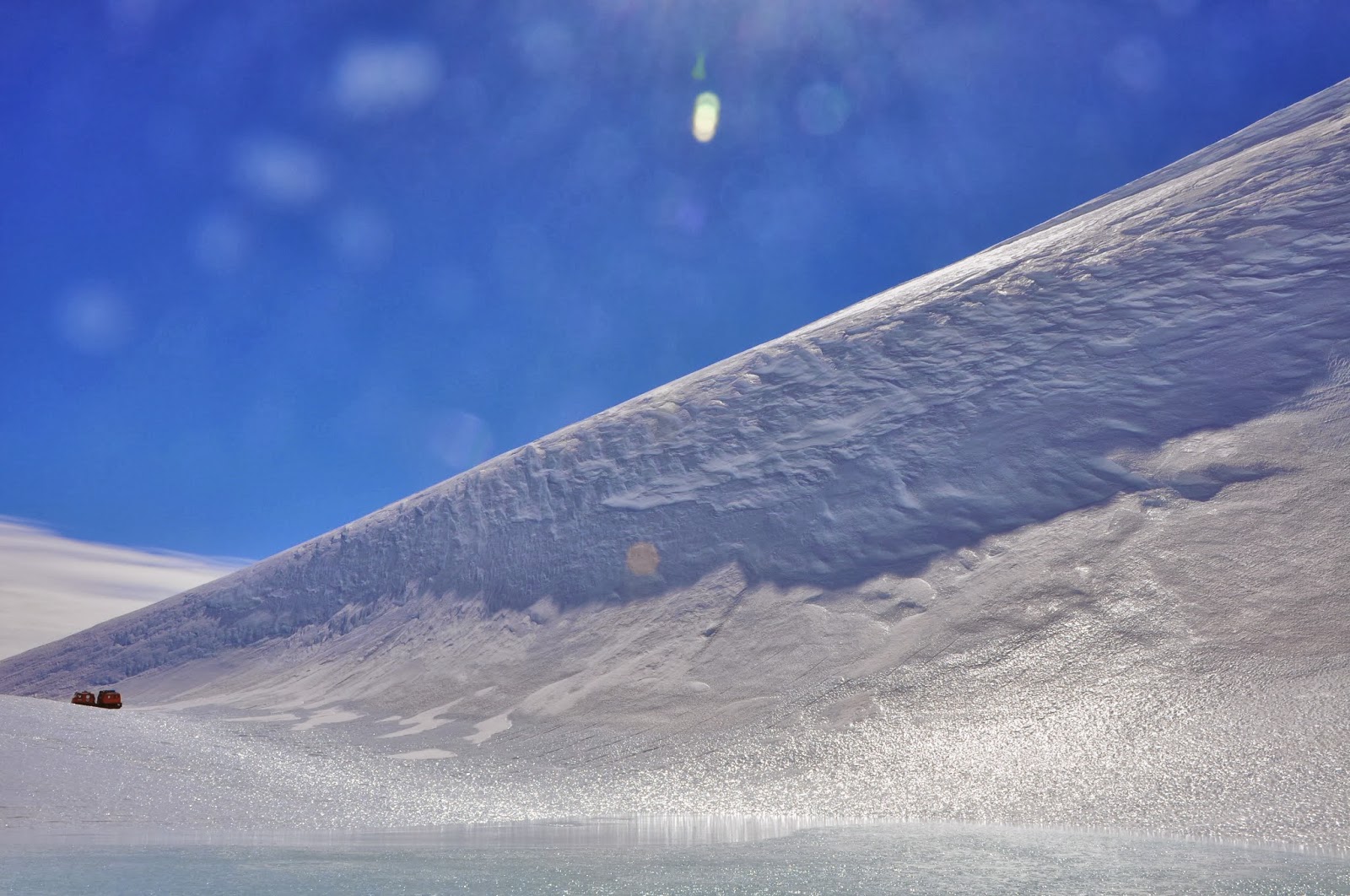 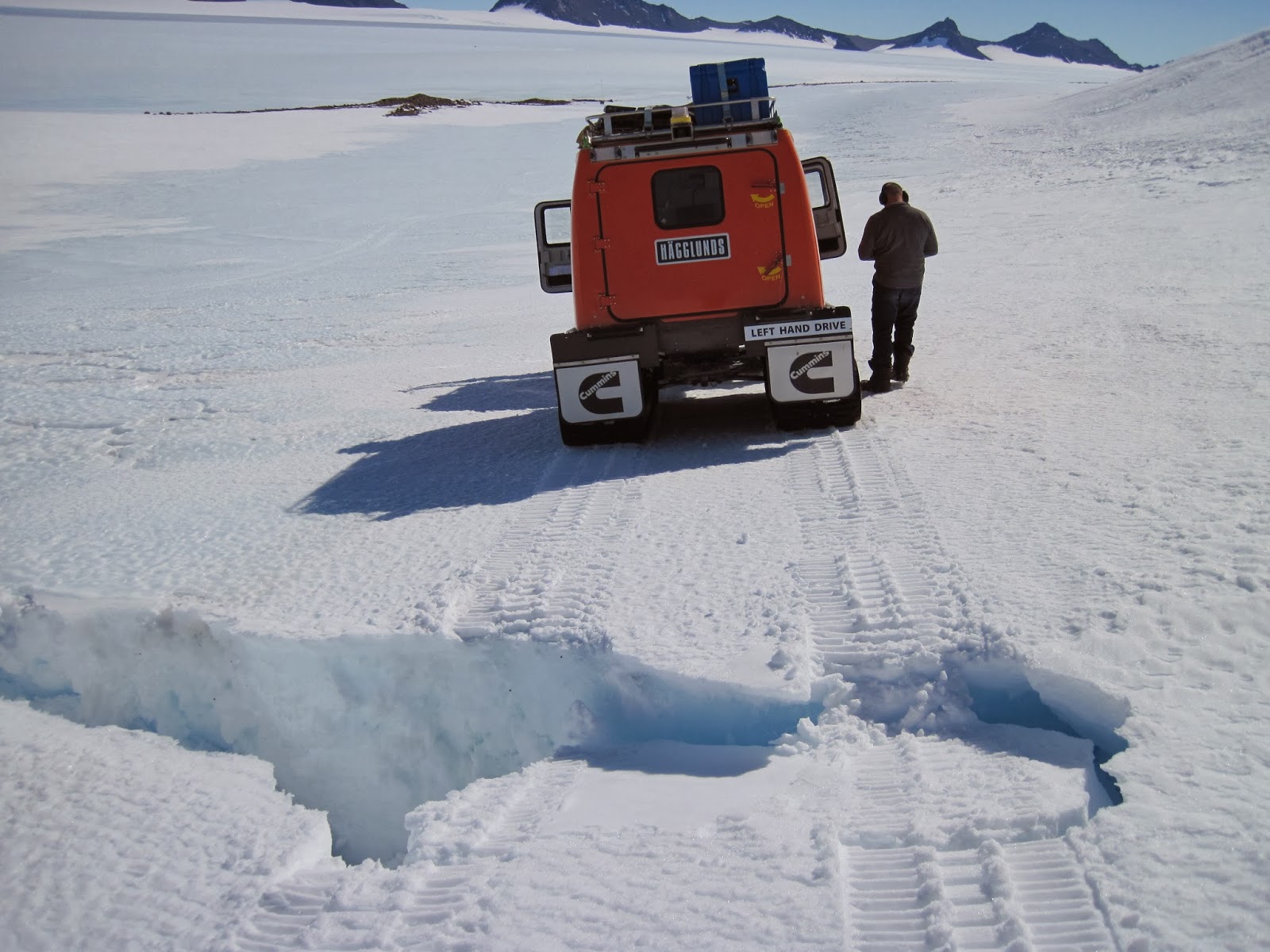 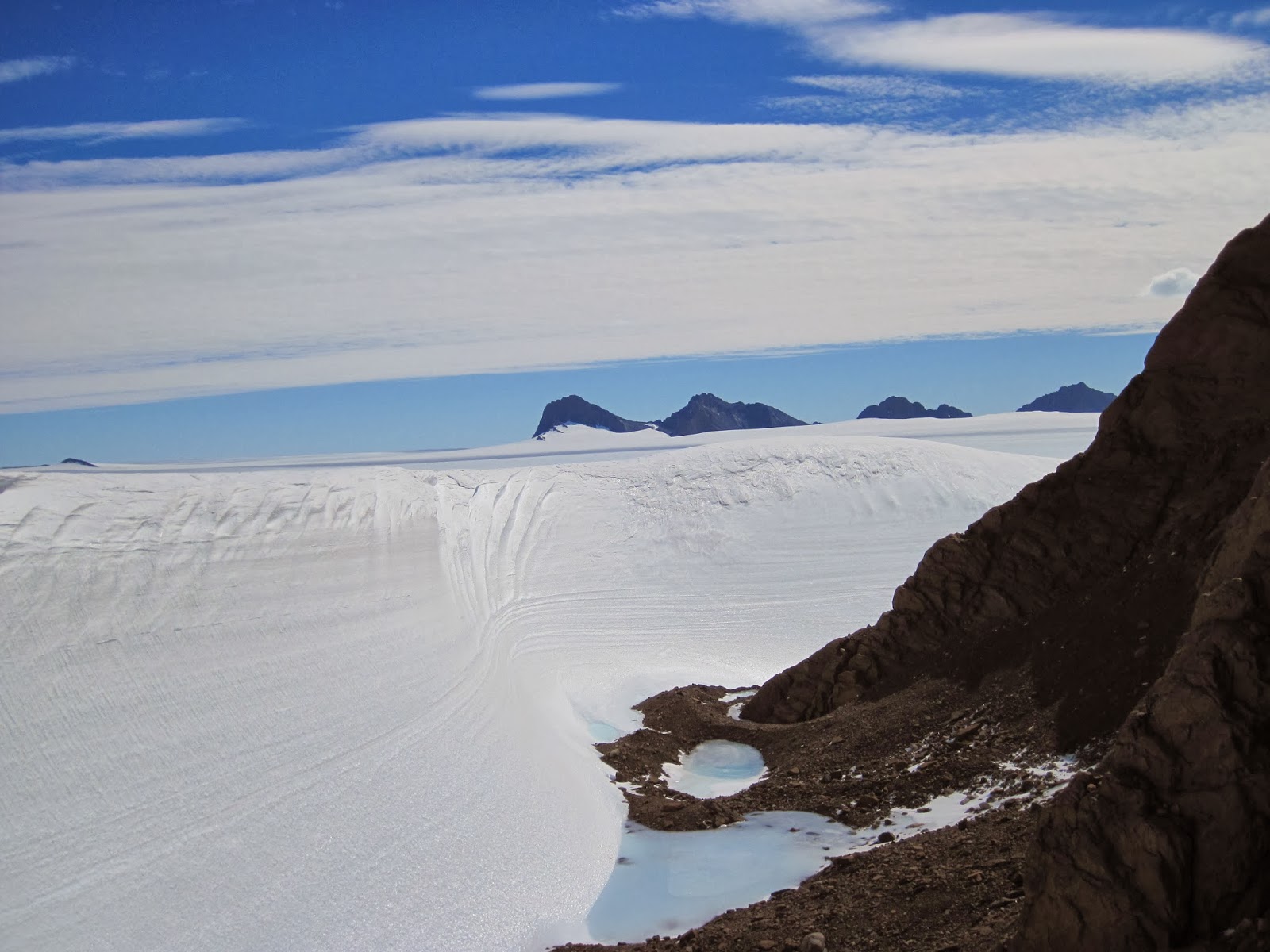 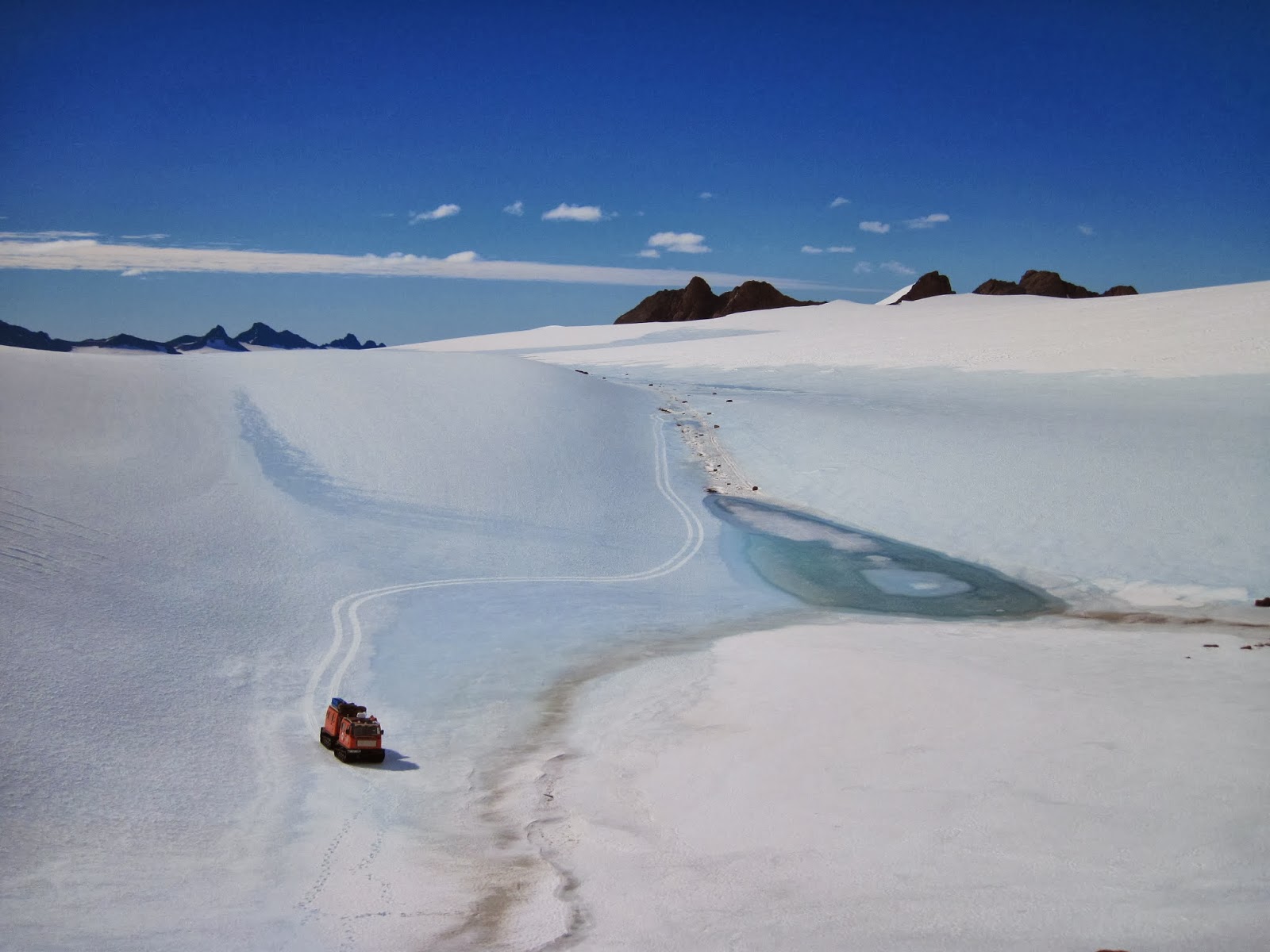 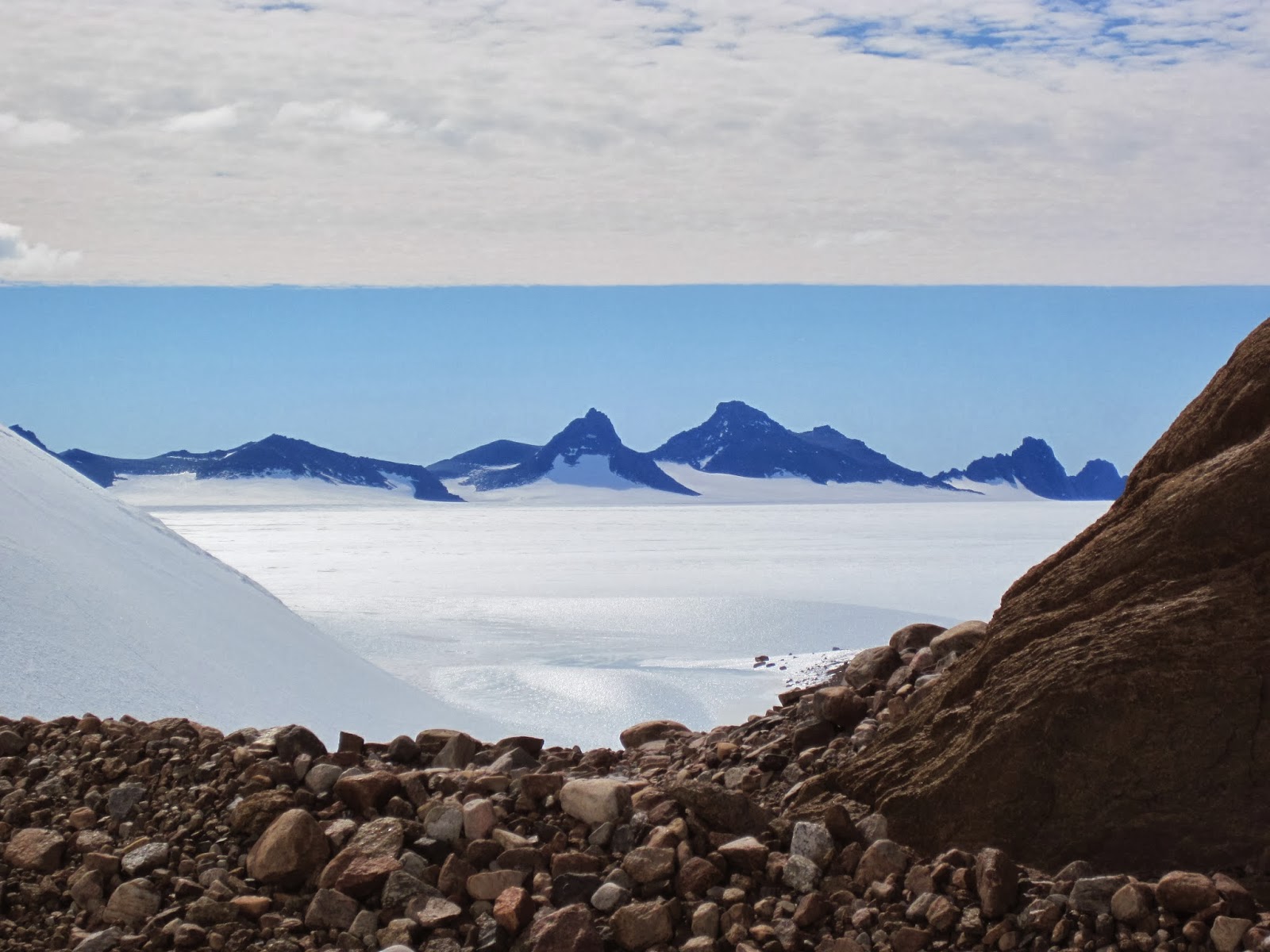 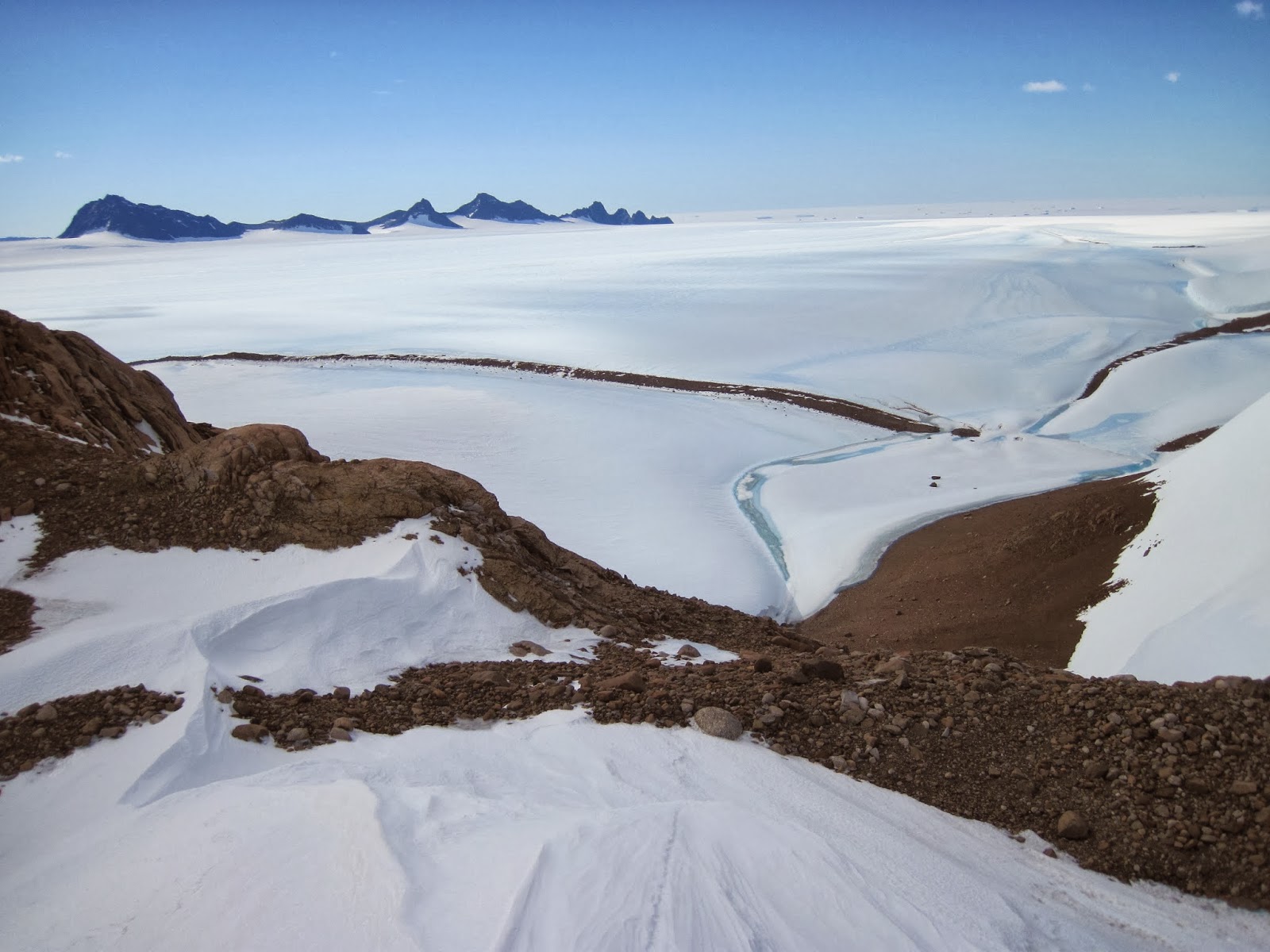 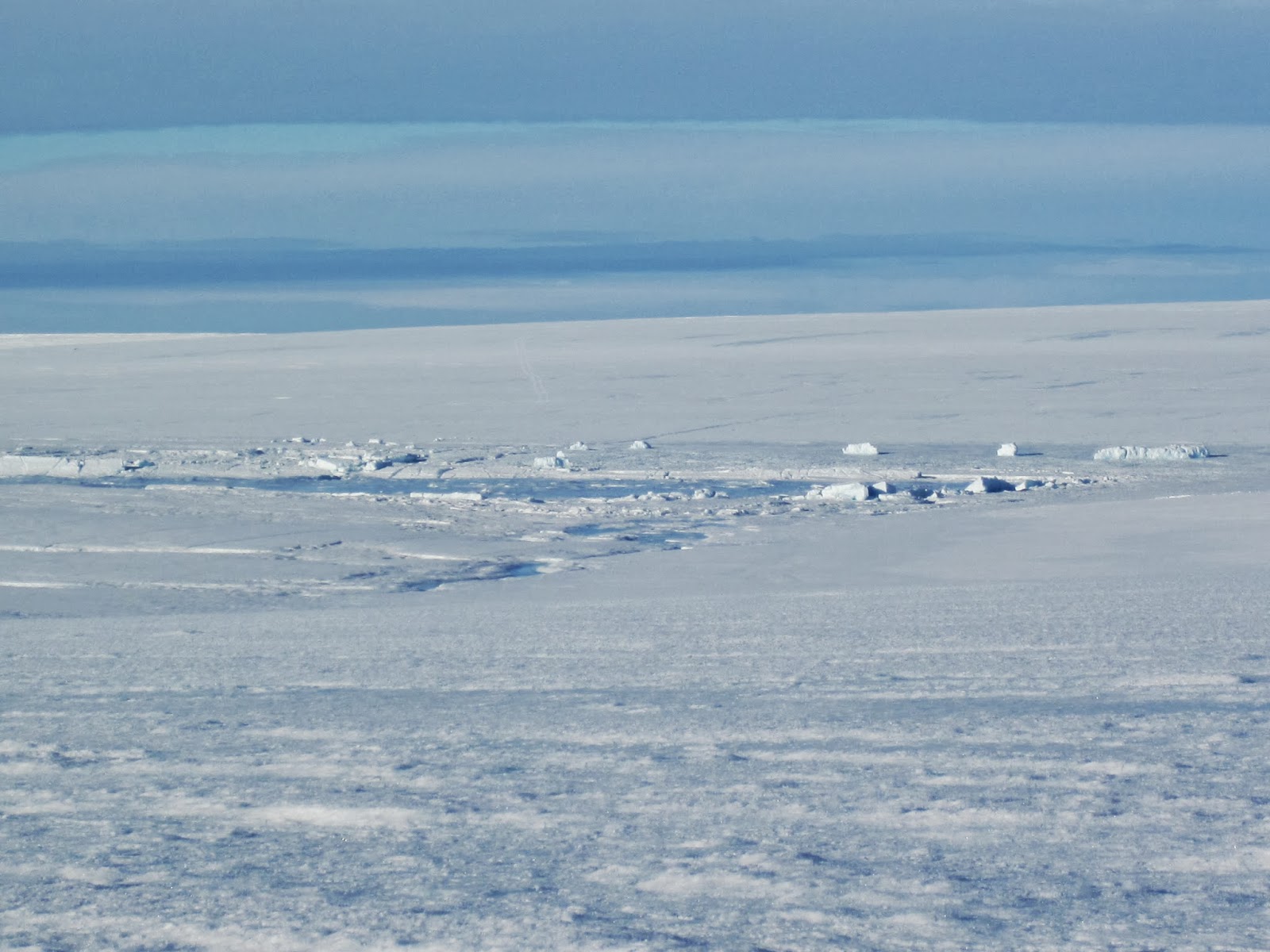 Where the ice had exploded out draining the lake 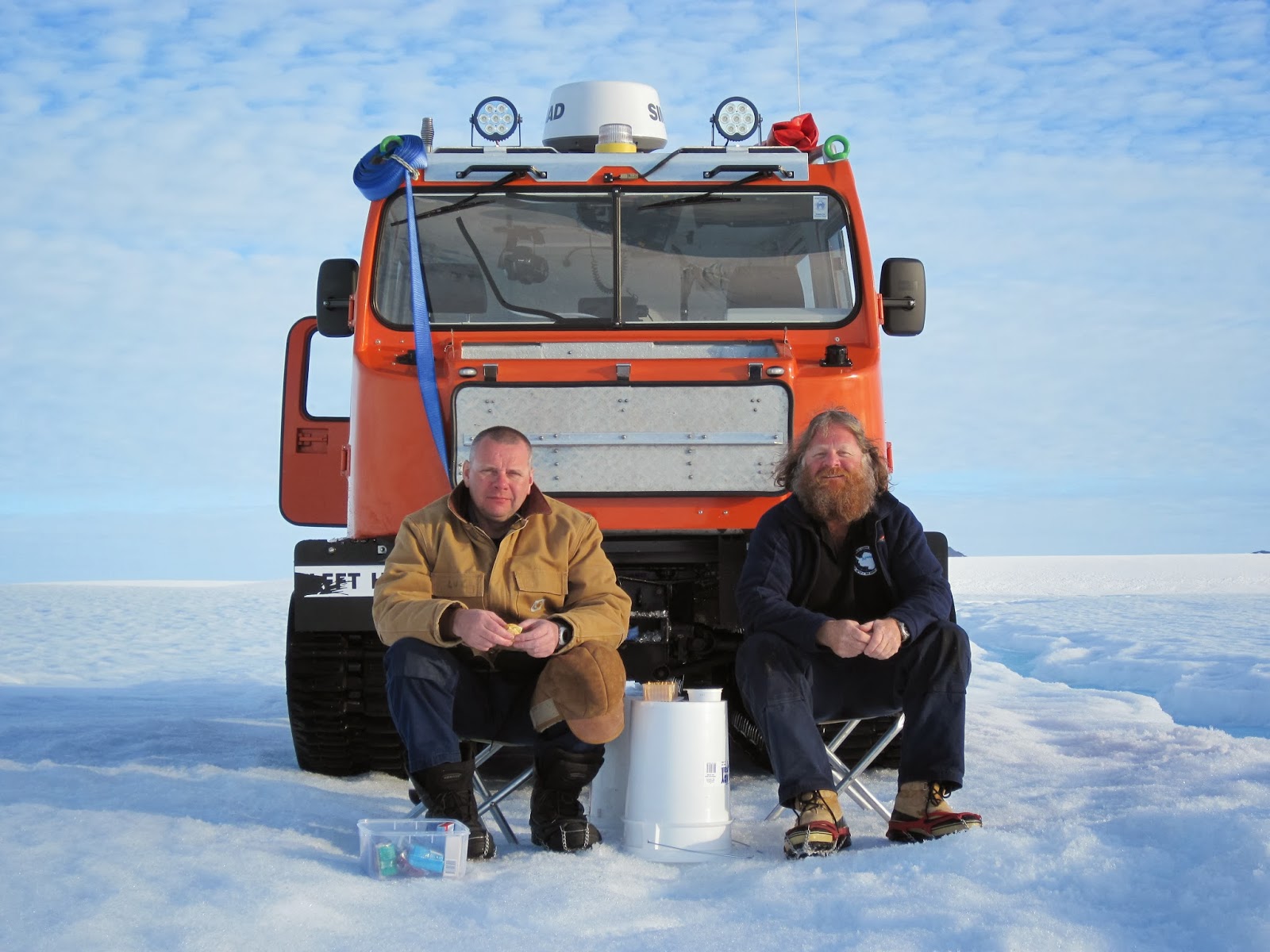 And just think, I am getting paid to do this.
Posted by Craig Hayhow at 08:15