Today it was battle stations from seven o'clock this morning. The temperature was minus twenty one with a twenty three knot katabatic blowing, that’s a wind chill of minus thirty six which will sort out these new people. The ship is now as close is it’s going to get at ninety five kilometres North of Mawson. The first helicopter was in the air at seven forty three and touched down at Mawson at eight ten MBT with two ground crew and some cargo. I was Mawson air traffic control until the radio operator arrived on flight three. Two of our summer crew will depart today and I’m due to depart on the fifth flying day after the official station handover maybe on Saturday.

Well just about everything that could go wrong did go wrong today. Of all days to lose the MET data, and then suddenly all the radios disappeared off the console system and after sorting out these two things I discovered the HF radios were not working. Thankfully after the third flight a radio operator flew in to take over flight SAR watch and I could go and investigate the HF radio problem.

I ended up finding three faults with the system. It was working perfect until we were told to turn off one of the 1kW HPA’s to save power. Doing this killed the battery charger and the node controller gradually flattened the backup battery until the node controller crashed. This must have caused noise on the node controller Ethernet port and then the switch closed down its corresponding port. On top of this, one of the USB extender cables had come loose. I fixed up the USB cable and then went back to the workshop and grabbed a high current power supply to quickly charge up the battery and then I opened the port on the switch and all was good again.

By now I had missed smoko and lunch so I went back to my room to chip away on my annual report and I ended up falling asleep for an hour, waking up just in time for dinner. I was up late last night researching hot water systems. The bar is closed from now on so I might have an early night tonight. (Yeah right) The place is crawling with strangers now and the whole dynamics have changed, but at least we have apples, oranges and bruised pears for the first time in over a year. There are lots of very very serious and important people everywhere.......NOT. Helicopters seem to attract these types of people, even a couple of our guys have suddenly changed the way they talk and act. I have never seen that before working offshore, but Antarctica is swarming with them. The fast ice region off Mawson Station is shown in Figure 1. Parts of the scene are obscured by clouds. The fast ice edge is indicated by the red line. This line is partly dashed in areas where the state of consolidation is unknown. The cruise track of RSV Aurora Australis (up until approximately 25/03/14 22:30 UT) towards the fast ice edge is shown as an orange dotted line. The general sea ice conditions have not changed. In Figure 1, three green shaded areas are identified where lee effects behind fast ice promontories creates persistent low ice concentration, thin ice regions. Those areas are high sea ice production regions, and sea ice accumulates at the windward opposite site of these embayment's where it thickens and backfills the bay. This same mechanism is seen clearly in the western part of Cape Darnley polynya, where new sea ice is rafting on top of each other and forming larger floes. 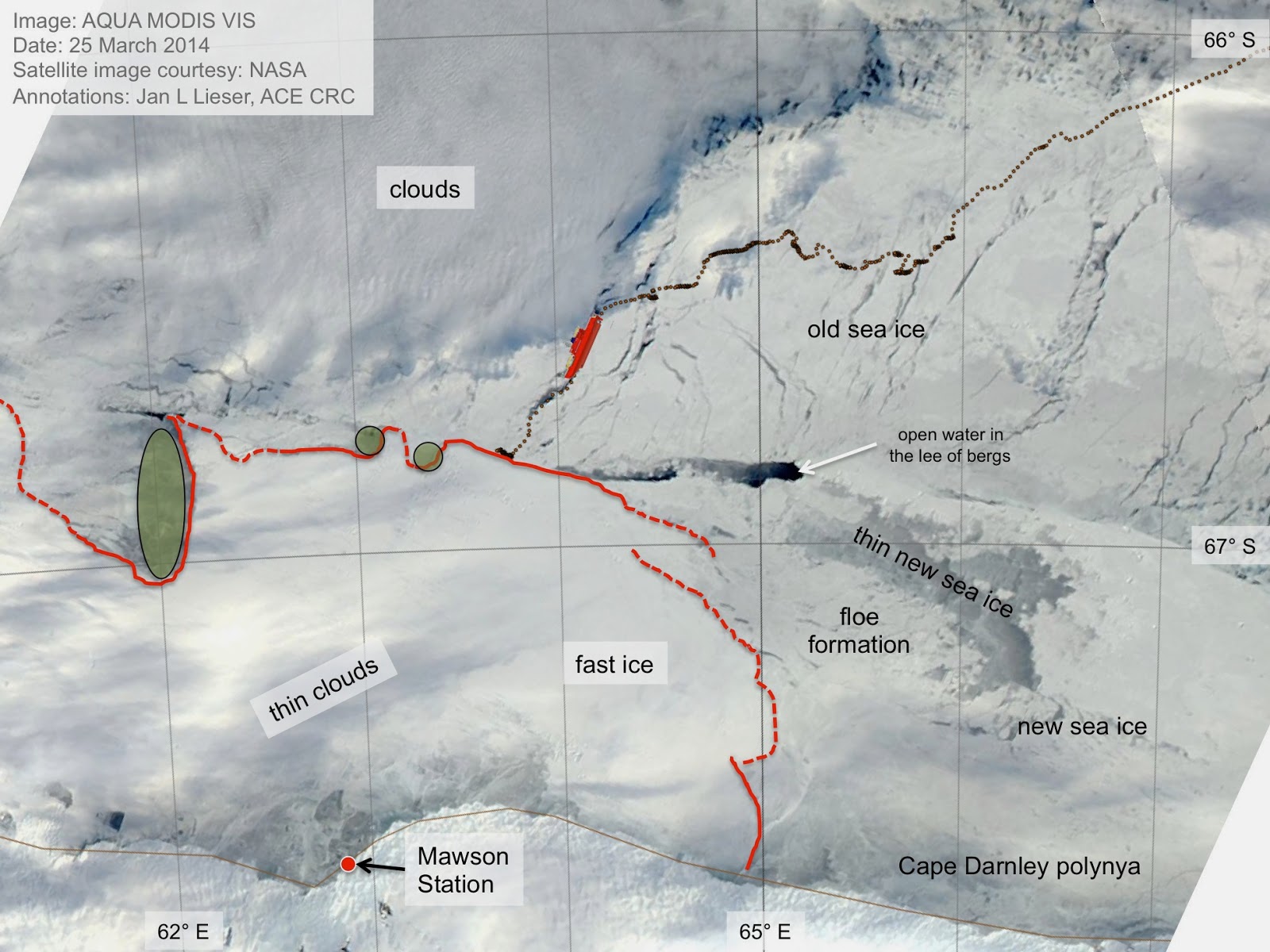