I woke up very tired today. In the morning there was no wind and the temperature was minus twenty five. I had an EME sked with Lance W7GJ in the USA that was unsuccessful once again and during the APANSA I discovered the spare radiation detector is playing up again. After smoko I had to go out to east arm to take some photos of a damaged antenna for Kingston and by luck there was a solar pillar and two sea dogs taking place. These are natural phenomena that occurs down here from time to time. 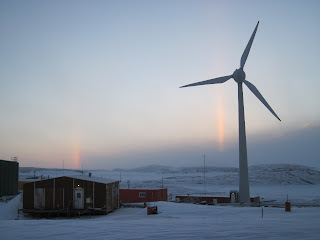 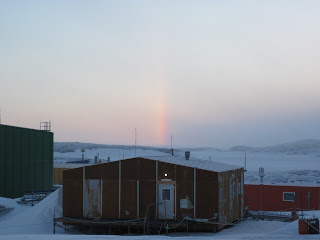 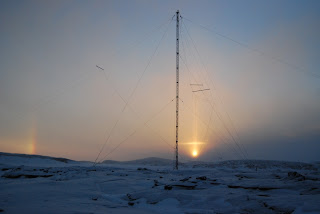 By the afternoon the wind had come up to twenty knots and it was very cold and the sky was overcast. I had to take some photos inside the ANARESAT equipment room and also the server room for Kingston as I think I have convinced them to replace the dangerous fire suppression system they are currently using.

I also did some more of the stupid audit and sent off the 95% that I had managed to find then we had to setup the video conference unit in the bar again and do a sound check with the Macquarie Island guy’s in preparation for tonight’s darts competition. Once again we got flogged.

I have been interviewed several times by the Editor of the Australian Antarctic Magazine for a story of my moon bounce antics here at Mawson and the final draft is now complete so that should be in next month’s addition. I am feeling very low and lethargic at the moment and can’t be bothered doing anything. I hate the very short day light hours and it’s getting worse. I really have to push myself to get motivated.
Posted by Craig Hayhow at 15:31