This morning there was no wind at all so I decided to get a few things moved around outside while we have a weather window. I used the JCB to move the new printer from Rosella to red dwarf. I had to dig out the door way of Rosella first though. Next job was to move the new UPS to the ANARESAT equipment room. This was going to be a challenge so I got Rowdy, John and Chris to give me a hand.

The plan was to use a Hag to move the gear as close as I could and then man handle the gear over the ice and down the wind scow and into the building. The plan looked good on paper :)
There was another UPS that had to be moved into the operations building but Rowdy and John had already moved this one into position. 1st, let me explain, each UPS consists of two pieces, each weighing about one hundred kilo grams and they were delivered with both items on a palette.

By the time I got the Hag warmed up and drove to the green store, Chris, John and Rowdy had the UPS unpacked and ready to lift into the Hag. It was a hell of a job lifting both boxes into the Hag and then John tied them down so they wouldn't move about and then off I drove to the ANARESAT building.

I backed up as close as I could and then John started un-tieing them. Just as I walked up I could see as soon as John untied them, they would slide back and I was just about to yell out when they slid back crushing Rowdy's hand between them and the back of the Hag. He was screaming like a baby while we all tried to move the heavy boxes in the confined space, eventually freeing his hand. Just sick it in the snow mate, that will stop the bruising. It must have hurt as he broke the plastic cover the mongrel.

Any way, after this little drama, Chris was digging a ramp in the snow (1st time I've seen him do manual labour) while we lifted the first box out and placed it in a polken. (sled) We dragged the polken to the ramp and tried to slowly let it slide down to the landing three meters below. This kinder went well bowling the three of us below over like ten pin bowling skittles. Ah, one down and one to go. As you can imagine, every one wanted to be up the top this time and finding a volunteer to go down below was quite difficult.

Any way, we managed to get the second box down without killing any one, just a few broken bones and a couple of broken spleens that will grow back any way. During the whole process I kept asking the guy's were is all the cables and stuff? There should be another box with all the cables and manuals etc. I thought this was really strange as I drove off in the Hag. Shortly after, Chris comes over the radio.....um er, well um I think we just moved the two battery units and we need to swap one of these with one of the controllers we delivered to the operations building!! 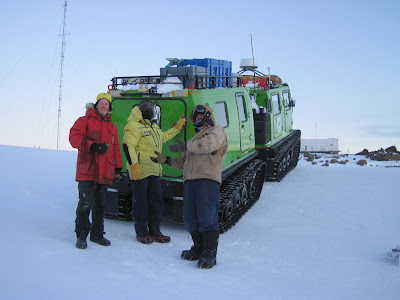 There was an eerie silence over the airwaves for quite some time till I broke radio silence with a "roger that".We all remained remarkably cool in minus twenty five degrees even though we were going internally berserk. No probs, we just head over to the ops building, get the control unit and take it to the ANARESAT building and take the battery unit from the ANARESAT building over to the operations building......simple. I bet the guy's in Kingston put these onto the pellets on a Friday afternoon not giving any thought to the poor bastards at the South pole who had to install them. 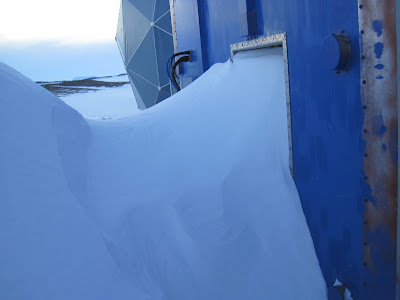 While we were doing this, Chris stayed behind to dig the ANARESAT building door out. This time I decided to use a trolley to take the control unit to the Hag. Man, this was so much easier. Why didn't I think of that before. We took the control unit still strapped to the trolley over to the snow ramp and just rolled it down and it was so easy. We swapped the control unit for the battery unit and after a bit of frozen sweat and the odd strain fart, we managed to get the battery bank up and into the back of the Hag, then it was a short trip over to the operations building where we dropped this off and the job was done. Well almost, I had to go back and help Chris digging out the door and by this time it was almost dark. 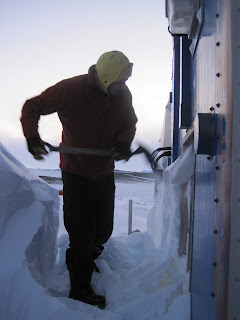 Another half hour we had the door dug out for the second time in a week and we managed to move both boxes into the building. Piece of piss. NOT. Every thing is SO hard down here. 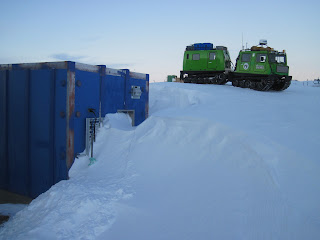 ﻿
After this, I setup a video conference unit in the bar in preparation for a darts tournament tomorrow night with Davis station. I also had an EME sked with some one, I forget now who but it was a failure any way. The guy's came back from Auster and had a great time. They estimated there were about four thousand emperor penguins in at the moment. I can't wait to get out there for a look.