I woke at two am with the worst migraine I have ever had in my life and I thought I was either suffering a stroke or was overcome with carbon monoxide or carbon dioxide fumes. I woke Luc and asked if he was OK and he said he was fine so I hunted around in the dark with my torch and took an aspirin and then went outside in minus twenty five to get some fresh air. All three vents in the hut were open so there shouldn’t be a gas build up and my finger nails were not cherry red so I figured it wasn’t gas asphyxiation.

I came in freezing and still in intense pain, then gulped half a litre of water and tried to go back to sleep. At four am I was still awake and in agony so I woke Luc to see if he had any panadol which he did so I swallowed four with another half a litre of water and in about an hour later I managed to fall asleep. (In the state I was in I never thought to look in the medical kit for strong pain killers or to call the station doctor on the radio) I didn’t wake till about ten am still with a very bad head ache and feeling like a zombie. We had hot drinks and something to each before heading off about twelve o’clock.

Once we got below about five hundred metres, the visibility once again became zero so after a discussion we decided to turn around and go back up on the high ground and circumnavigate Fischer Nunatak (A Nunatak is Norwegian for a mountain) and maybe climb the 707m summit. When we got up high and around the eastern side of Fischer Nunatak the visibility once again returned to zero so we decided to call it quits and head back to the station.

I was suffering all the way back and trying to concentrate on navigating in the whiteout was nearly more than I could handle. Eventually we got back down the plateau to around 300m and the visibility increased to about 150kms with a magnificent view of the mountains, sea ice and ice bergs far off in the horizon. It was so good, I pulled up and switched off the motor and we lay on the ice for half an hour listening to the intense silence and the cracking of the ice sheet. 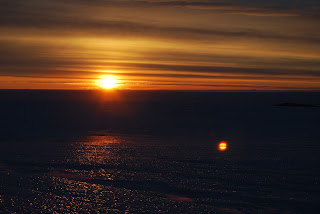 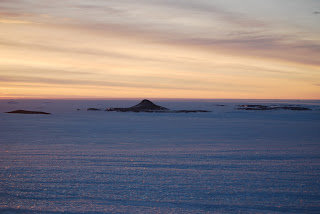 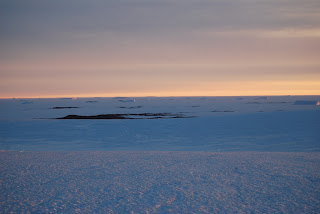 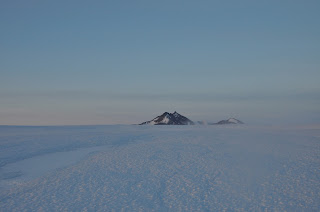 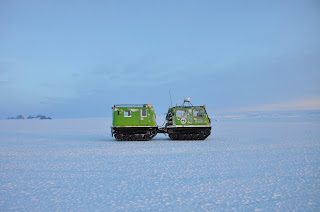 It’s amazing the sound the ice makes as it’s alive and cracking and groaning constantly. In this area the ice moves towards the coast around 15 - 20 cm per year. We took a few more photos and then continued the journey back down the plateau. On the way back I spotted something in the distance and I took a short detour to check it out. 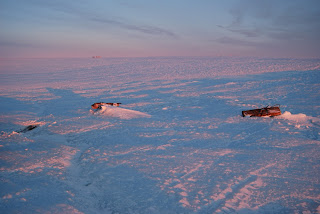 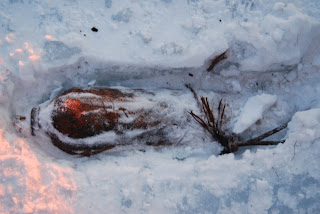 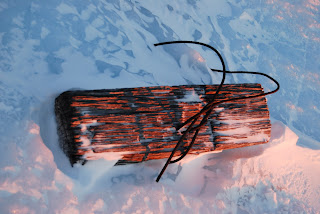 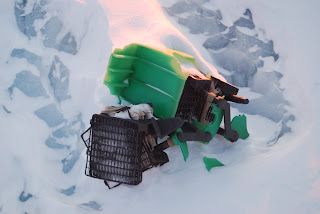 It looked like some vehicles or equipment left at the old Gwamm depot that I had spotted on Google Earth but it turned out to be very close and it was some very old tie downs for something long ago in the past. (It's very hard to judge distances with such good visibility) There were large slabs of wood that were once buried in the ice with steel cables tied to them and also a gas bottle and an old battery. 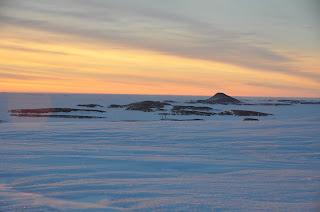 We headed back to the station and got rid of our rubbish and piss & shit bags (I forgot to take the pisspot) and refuelled the Hagg. Once packed up, I went straight to see the doctor and he didn’t think I suffered a stroke, but maybe it was a combination of altitude sickness and gas asphyxiation accentuated by alcohol. Maybe so, but strange Luc was fine the whole time and neither of us had a hangover. Any way I took some strong pain killers and went straight to bed after dinner.