Today there was very little wind and it was snowing, always a pretty sight. By smoko the wind had almost dropped to zero so I decided today was the day to down load the tide gauge data. I spent about an hour getting prepared and using some photos to locate the exact position, I drilled the sea ice and put in a cane pole where I thought it should be.

The tide gauge sits out in Horse Shoe Harbour in about eight meters of water. The idea is to first find the location, then drill a twenty five centimetre wide hole, two meters down through the sea ice using a Jiffy drill, then lowering an eight meter pole containing a camera, light and a transducer that fits over the tide gauge transducer. Simple, I mean, how hard could that be?

Well after four hours out in minus twenty and snowing we had drilled four holes and seen lots of star fish, but no tide gauge. The photo sights were not lined up exactly and one of the photos was taken over the water so we weren’t confident that photo was accurate so we ditched that photo and just went on the other three marking a spot eight meters away.

By now it was well and truly dark and our boots and pants were frozen solid by sea water and everything was covered in snow so all we could do was pack up for the day and go try and get warm. Later I contacted the responsible engineers in Kingston to see if there was a way to test our equipment or it they wanted us to try and raise the tide gauge. 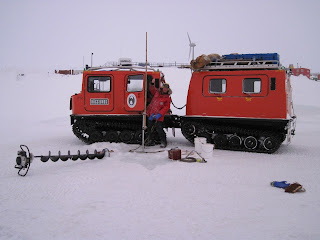 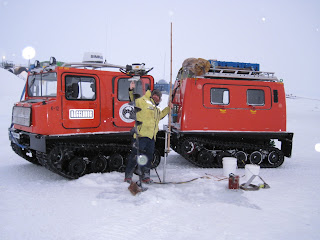 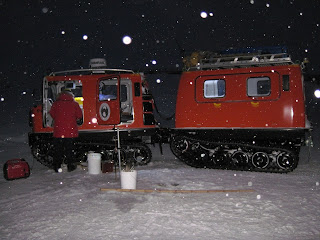