The day started as another perfect day, sunny and no wind, but the wind came up in afternoon and was blowing 50 knots in true Mawson style by late evening. After having breakfast and a coffee I did the ARPANSA filter change and then went over to the green store to check through my cargo in the hope my valve was in one of the boxes but it wasn't to be. It must still be sitting at Davis with the remainder of the cargo.

I wandered down to the transmitter building and went on air for a short time, but the band was very dead but there was a JA CCTV signal cranking 599 so I sent a few pictures through and made some guy in Japan very happy. After lunch at one thirty I ran through some fire training and induction for the new guys then went for a long walk out on east arm looking for Adélie penguins but I didn't see any, instead I found five snow petrels either nesting or just roosting under large rocks and ledges. 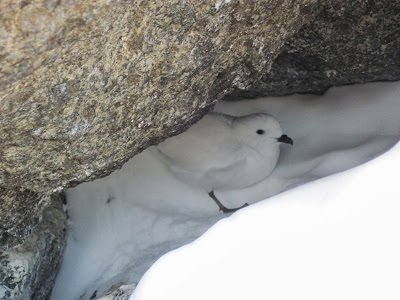 When I came back to the red shed I put a load of washing on and then went down for a spa. I found out it was Cookie’s 60th birthday today so I congratulated him. He didn't want a cake and kept it low key and he and Peter L went up to Rum doodle for the night and it blew like the clappers.

At the bar tonight there were too many people and we winterers felt very awkward. We winterers feel lost and a bit out of it at the moment, and finding it very hard to adjust, but I’m sure that will pass. It will be a bit better when the science crew leave in 4 weeks or when they are out in the field so we can get to know the summer crew a bit better. Tonight I put on Kakoda in the cinema and I was very disappointed at the poor acting and lack of story line for such a defining moment in Australia’s history.
Posted by Craig Hayhow at 10:02