Macey hut was the original Fang Peak hut, although its history before that is unknown, was made by Freighter, a company in Mordialloc Victoria. The hut was towed to Fang Peak in 1982 and was placed in the bowl below the site of the present hut. This was not a well chosen site and the hut was half-buried by 1983. It was then moved up the hill to the present hut site, but was not guyed down.

In about January 1986 it was blown clear of its sledge and rolled up the hill. It was deemed to be a complete wreck; though most of the damage was internal. The operation of remounting the hut on a sledge for the return trip to Mawson was very delicate, as can be imagined, on that rocky sloping terrain with the wind roaring up the valley.

The original Fang Peak freighter was partly refurbished in 1987. Then in 1988 an expeditioner at Mawson put the finishing touches to the interior, including a picture window and carpeted floor. It was towed to Macey lsland on 24 June 1988 and guyed down just on the Auster side of the Island. 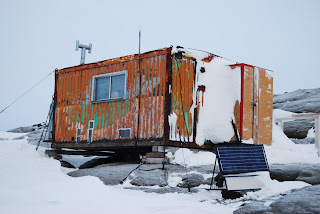