Today the wind was back with a vengeance. Sixty nine knots and at times a total white out. Cave digging was abandoned and after a lengthy communications meeting with Pepe I finally developed the motivation to make my way down to the operations building.

I poked around for a while cleaning up a few things and replying to emails then thought bugger it I’ll go and see what’s happening out in the big wide world so I cautiously made my way down to the transmitter building without getting blown away.

Conditions on twenty meters was off the dial with Perth stations coming through 5/9 so I put a call out and within no time I was bombarded with hundreds of stations. I tried to work as many VK stations as I could to give them an opportunity to get a VK0 into their logs. I had some really nice chats to blokes all over the place and even caught up with several people who have been emailing me for months. As well as VK stations I worked dozens of other countries all around the world including my mate Dave on Marian Island, Rob in ZL and quite a few local blokes from Perth. I was in such high demand and signals were so good I had to put off going to smoko and then I had to put off lunch and after five hours of nonstop continuous DX’ing I eventually had to call it quits for the day. There must have been several hundred new calls in the log and lots of very happy people out there in radio world. By this stage I was very hungry and thirsty so I trekked my way back to the red shed for a drink and helped Keldyn out with some mid-winter preparations. 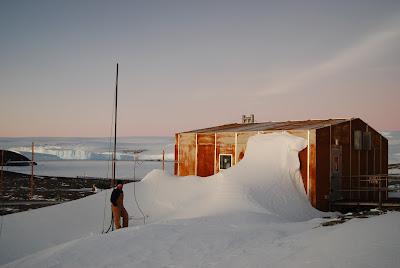 The old transmitter hut has become my second home
﻿
Posted by Craig Hayhow at 06:11