I woke at midday and it was still blowing hard. After checking my emails, the ANARESAT and the news I stumbled out into the mess and the place was deserted. Lucky I was able to find an old pizza calzone at the back of the fridge so I didn’t have to think too hard about food preparation. While I was having a chomp and a coffee a few ragged expeditioners stumbled back into camp.

Loud music was forbidden throughout the day and I believe the hospital became critically low on Panadol pills.

I could have done with a relaxing spa but outside was out of the question (funny as it was so good last night) and I couldn’t be bothered gearing up and making the trek down to the green store. So in the end I decided to have a lock-in and get my Blog up to date which was no mean feat when the motor was only firing on three cylinders. I only ventured out for more coffee and at one stage to wash my rust stained white shirt. Dinner was the fancy duck we couldn’t get down last night and there was a fair bit of crude jovial conversation as a couple of bottles of wine were popped to wash the duck down. Trent and the Doc never made an appearance and there was some whispering maybe someone should go outside and dredge the spa, but it was decided it was too bloody cold and so we kept on chomping. After dinner there was a movie playing in the cinema but I’d already seen it so I went back to my room and finished off my Blog.

Just for interest sake, here is my mawson bullet collection so far. I wonder if they were used for target practise or for culling seals for dog food? 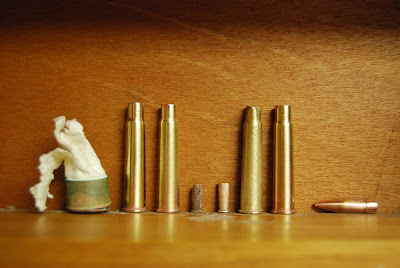 Thanks to George, I think I now know where they came from J

"Did a balloon flight (Weather balloon) with Arab yesterday (Bill Kellas) – 40000 feet, elevation 22 degrees. KB and I shot at it with the 303 rifle – missed. To give it a fair chance we didn’t shoot till after it was at about 100 feet/30 m and that didn’t improve our chances" 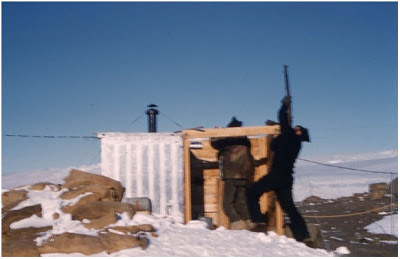 Bill Kellas working the theodolite; Ken Bennett working the .303 inch army rifle.
And on another note, check out this link for a great old movie about the first Volkswagen Beetle to come to Antarctica. Mawson of course. http://www.youtube.com/watch?v=i_FftkcIIdg


Here's a 1963 cinema short featuring the Volkswagen Beetle which was sent to Antarctica in 1963 for use by the Australian National Antarctic Research Expedition.

Named "Antarctica 1", the Beetle was a slightly-modified standard production vehicle built at the Australian factory in Clayton, and shipped over on the Nella Dan.

Following its return to Australia, it was displayed in various places, and entered in - and won - the 1964 BP Rally. After that, it disappeared. Current whereabouts are unknown, but it's generally thought to have been scrapped...