When I woke this morning it was still blowing a gale outside so the trip to Welsh Island and Béchervaise Island was called off so I had a relaxing morning before wandering down to the shack for a sked with my good friend Don in South Australia. Unfortunately his rig blew up and so the sked was off. He could hear me 5/9 though, so I gave him a bit of stick over the radio as I knew he couldn’t reply.

While in the shack I chatted to a guy in Perth and several other contacts around Australia before heading off to look for my torch that has gone missing. Thankfully it turned up in the Biscoe hut. Simple things like this torch can be life saving in this place. While up this side of town I climbed up over the large snow drifts and dug my way into the ANARESAT building to reset the antenna positioner that had fallen back into manual mode since the power outage last night.

Our power is mostly generated by the wind from our two huge wind turbines and we always have one of four generators running to pick up the load when the wind drops. The system generally works very well but sometimes when the wind suddenly drops the generator can’t kick in fast enough and we suffer a short power outage. Mostly these outages don’t affect too many things on station as most things are on UPS, but occasionally some things bugger up and while here I have reconfigured quite a few things to stop power outages causing problems to communications gear.

The Mawson wind turbines where the first to be installed in Antarctica and they have just turned ten years old and have proven to be a great successes having saved on hundreds of tons of diesel fuel. They are built bullet proof to combat Antarctic conditions and when the wind gusts they roar as the huge blade tips spin at over two hundred kilometres per hour. They are designed to feather the blades when wind speed exceeds fifty knots to prevent any dammage occuring. Originally there were three to be installed but unfortunately one got damaged during transportation and was never repaired or replaced but was later sold off for a pittance. 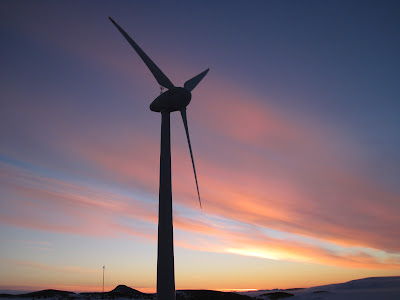