I had a nice sleep in and when I woke it was blowing 50 knots with zero visibility. I had a shower and some scraps for lunch. After lunch I went out and dug the spa cover out of the snow and tied it back onto the spa. After this I went down to the radio shack to play around with the 1kW amplifier.

After a few hours of messing about, I took off my fleece top and when I picked up the PTT cable going to my Flex radio there was a big static spark and after that the PTT would lock up every time I pressed it, so I think the spark has done some major damage. I was so disappointed I just left things as they were and walked back to the red shed. I had some scraps for diner and later watched a movie called “The Edge Horizon”.

If I can't repair this one then it's all over with nothing to do but play darts and pool. 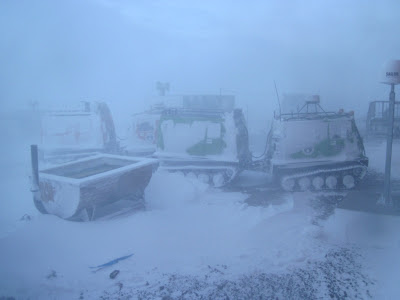