Today it was blowing a sixty knot blizzard all day and on top of that it is dark most of the time so there is very little incentive to get out and do some hard yakka. I had a planned sked with a guy in the US at 10:30 but conditions were very poor and we didn’t have any successes. I decided to play around with the 1kW amplifier tuner to get a feel of how it works without much successes, so then I went to help Keldyn to fill the indoor spa, change the filters and whack some chemicals in it.

While the spa was filling we headed off to lunch. After lunch I went and helped Keldyn fill the outdoor spa with water and got soaking wet in the process as the hose was about one meter short and water was spraying all over us and instantly freezing. After a while my hands started to go off then I remembered the indoor spa was still filling so I went down to check it out and bugger me it was overflowing. (And it’s on the second floor) Oops !!

I then spent the next hour mopping up the mess. The floor was disgusting and needed cleaning any way so I thought it was a good job done. After this I went back to the outdoor spa and all was under control so went back to the green store and got a TV to setup in the Biscoe hut for the video conference tomorrow morning with the division director and the other four stations.

While there I gave Cookie a hand setting things up for tomorrow’s special 100 year old lunch we were having in this old historical building. The biscoe hut was the first building erected at Mawson in 1954. It was built in Norway for the English & Norwegian 1952 expedition and it wouldn't fit on their ship so it was left behind in South Africa. The famous Phillip Law purchased it and brought it down to Mawson when the station was first settled. The small building has been used for sleeping quarters, mess, recreation room and a carpenter's workshop. It suffered a fire several years ago and was carefully restored to its original condition and is now a real heritage asset to the station. We currently use it for a band rehearsal room and as a dining room on special occasions.

After dinner we had the usual foreign movie night and this one was a stunning Norwegian masterpiece called Troljegeren. I won’t tell you what it’s about, but trust me it's very unusual, totally unexpected and well worth watching. After the movie debrief a couple of episodes of Swift & Shift were played as usual which had us laughing our eye balls out. As it is still blowing sixty knots, the mid-winter swim will be postponed until there is a break in the weather. 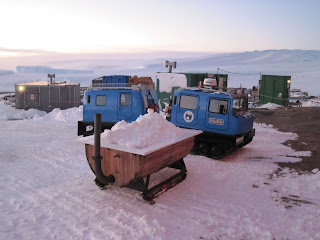 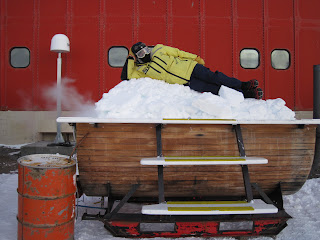 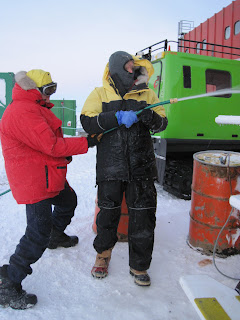